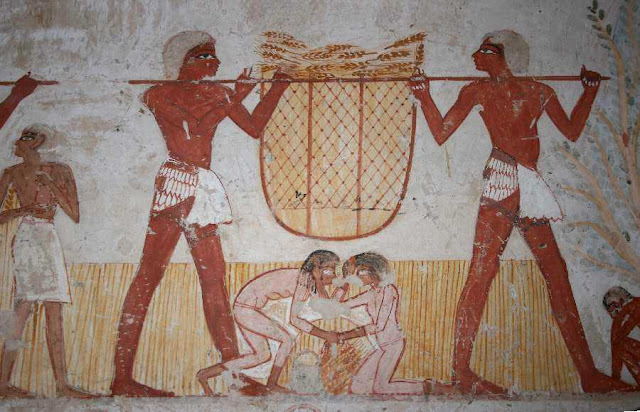 men doing the harvesting, are two pairs of men carrying two large nets, containing the crop, suspended from a long pole which rests on their shoulders. They walk towards the threshing area which forms the end (right) scene of this sub-register. Each of the men wears only a brief garment. These are very special, with an design looking like feathers (a reminder of the Rishi coffins) and a small flat white front piece with a scalloped lower edge. 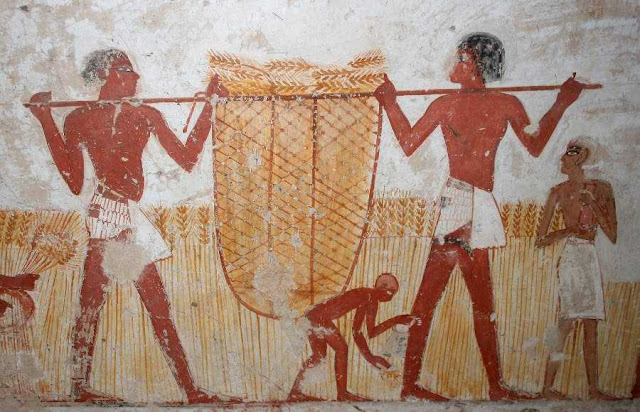 Between the two sets of bearers stands a younger person, facing the left-most pair . Due to the paler colour of the skin, this is probably a girl. She wears a long skirt and a head scarf which hides her hair. She holds a small vessel to her chest, probably containing water. Under the net of the left pair, a young boy, totally unclothed, picks up grain which has been dropped. Under the net of the right-hand pair (see image right) are two small girls dressed in a similar way to those in the lower sub-register, one of whom was pulling a thorn from the other's foot. However, these two quarrel with each other and pull at each other's hair. A basket lies on the ground between them, so it would appear that they were also gathering ears of wheat before they started their argument.