"Bast or Bastet" one of Ancient Egypt Goddesses

Posted by Egyptraveluxe on September 11, 2013
Do you ever find yourself thinking about how you would rather be lounging around somewhere else, engaging in something luxurious? Bastet would always and forever encourage you to do so. She is the Egyptian cat Goddess of passion, pleasure,and the sun to name just a few. She loves to dance, and remembers to never take things too seriously. Who wouldn’t want her around? Especially if she can help you with love issues as well as self doubt obstacles. She has that special nocturnal cat vision, that allows her all seeing eyes to see through the darkness in physical circumstances and emotional ones, so we can become our true selves. Bast herself is one strong and loving personality, which attracted her many followers. She was worshiped around 3,000 B.C.E, and was known for her protectiveness of households and of women. Her worshipers of Ancient Egypt attended her shrine in Baubastis, that was made of pink granite and was considered to be one of the most beautiful temples in the world. The temple grounds also held Bast’s cat followers who were mummified within the cemetery in her honor. 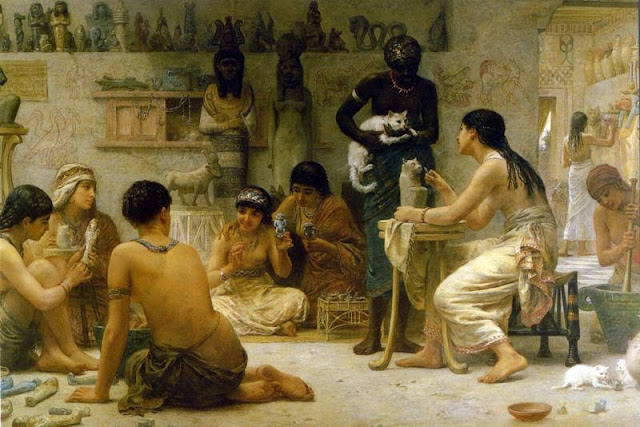 Bast, is more than any other of the Egyptian goddesses was perceived as a protector and friend oAs a gentler, more benevolent, evolution of the lion-headed goddess Sekhmet, her violent and bloody sister who could bring plagues, the goddess Bast could be invoked to prevent the spread of illness.

Consistent with her cat-like image and her status as a fertility goddess, Bast was associated with childbirth, perhaps because of the mother cat's continuous production of litters and the loving way she fiercely defends and cares for her kittens. 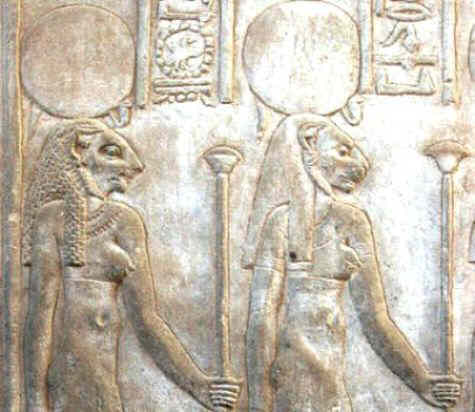 As a gentler, more benevolent, evolution of the lion-headed goddess Sekhmet, her violent and bloody sister who could bring plagues, the goddess Bast could be invoked to prevent the spread of illness.


Most households contained a small statue of Bast as a form of household protection . . . The All-Seeing Eye, to ward off thieves. . . as the Cat Goddess, to keep the house free of snakes. . . and as the healer to ward off infectious diseases.

Does this goddess sound like a gal that the phrase "sex kitten" would be invented for? Hardly! But, of course, there is more to the story than we've told so far :

For starters, one of the oldest versions of the goddess Bast was known by the name 'Pasht', from which our word passion was derived. (And from which the English term "Puss" may have arisen.)

Her name itself shares the hieroglyph of a bas-jar, a large pottery jar, usually filled with expensive perfume, a valuable commodity in a hot climate. Indeed, her son Nefertem, a sun god, became the Egyptian god of alchemy and perfume .


Do what Bastet would want you to do and party it up!

Rituals honoring Bast included light-heated barge processions and orgiastic ceremonies. Her cult can be traced back to about 3,200 BCE, and she became a national deity when Bubastis became the capital of Egypt circa 950 BCE.

Many festivals were held in her honor, and they tended to be quite rowdy affairs. During the major festival, thousands of men and women (children weren't invited) traveled on barges down the river to Baubastis, drinking and partying mightily.

With loud music, women shaking their rattles, others gyrating in dance, and some lifting their skirts while making lewd comments to the townspeople lined up on the riverbank to watch the procession, the feasts of Bast may have been a precursor to the Mardi Gras and Carnivale. Some think that it is even the basis for the word "floats" that describe the decorated rides in a parade. 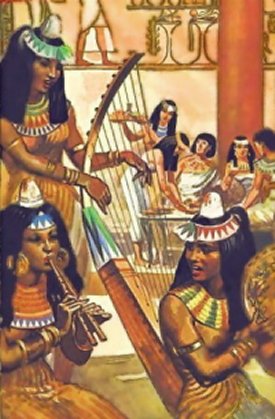 In Egypt male cats were called Mau and females Mait. Cats knew the words to vanquish the powers of darkness and would whisper them to people who loved and befriended them. The black was believed to carry particularly potent magical powers.

The Greeks identified Bast with Artemis. Artemis (or Diana) often appeared in cat form. The legend of cats having nine lives probably stems from Artemis as the mother of the nine muses or from the nine primal great Deities of Egypt; a male and female pair for each of the 4 elements plus their mother. 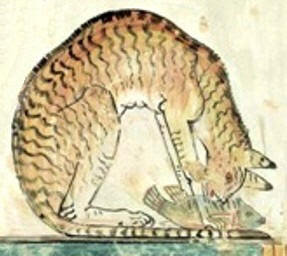 When she wasn’t being worshiped for the exquisite goddess she is, she would ride with her father Ra, the sun god, in his chariot to pull the sun across the sky. She lived a life of ease and luxury, but always made sure to help her fellow Egyptians by giving them fertile crops to plant, and water to fill the rivers. So in this case she is also a fertility goddess.

With all these attributes, also came her addiction to love. This wasn’t a negative addiction, mind you, but Bast had a way with both men and women. She had many lovers and affairs, all involving her special ingredient of seductive passion. 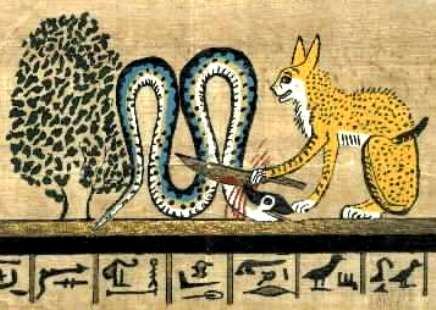 A very playful goddess, but also very motherly and on her guard about those whom she loved. This intense warrior side came in handy when she found her father in danger of the god Apep, who was his largest enemy. Ra’s followers tried everything they could to protect him, but in the end it was his daughter Bast who killed Apep within the darkest hour of the night with her all-seeing cat eyes, that shone as brightly as the moon itself.

History, Mythology and Facts about Bastet


Micerino the name of the builder of the third pyramid al Giza also built a Temple in Bubastis dedicated to Bastet.

Denderah in Upper Egypt was sometimes known as the "Southern Bubastis".

Evidence from tomb paintings suggests that the ancient Egyptians hunted with their cats, who were apparently trained to retrieve prey.

More than 300,000 mummified cats were discovered when the temple of Bastet at Per-Bast was excavated.

The Greeks identified Bast with Artemis. Artemis (or Diana) often appeared in cat form. The legend of cats having nine lives probably stems from Artemis as the mother of the nine muses or from the nine primal great Deities of Egypt; a male and female pair for each of the 4 elements plus their mother.

The cult of Bastet was officially banned by Roman imperial decree in 390 AD. 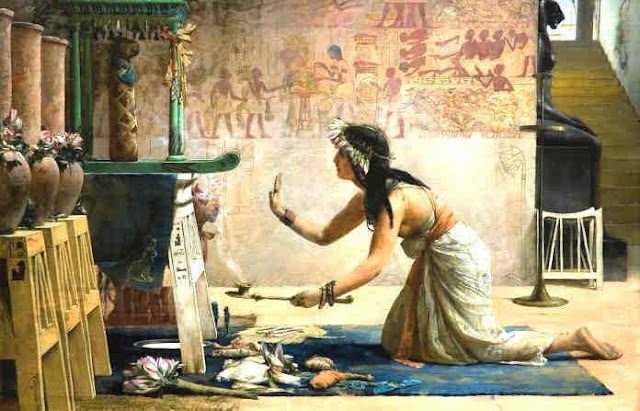 "Bast or Bastet" one of Ancient Egypt Goddesses
Location: Egypt