The Irrepressible Legacy of Hatshepsut 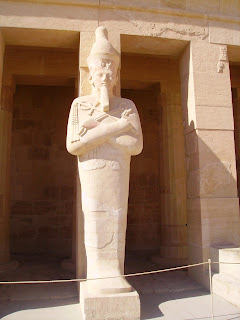 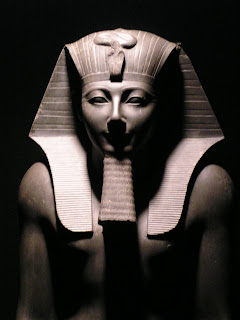 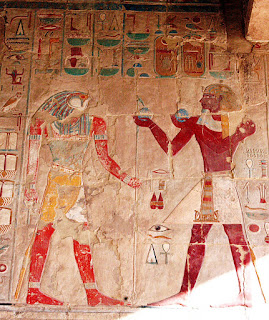 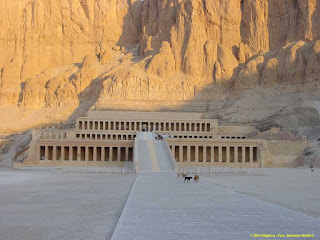 Holding the symbols of office, she ascended the throne. Once the place where her husband sat, it was now hers, by a right that she was about to assert... Turning, she chuckled to herself as the long beard attached to her chin brushed her chest. She'd put on all of her dead husband's regalia, knowing that despite her female form, thttp://www.blogger.com/img/blank.gifhe symbols would connote their own power.

“By order of the god Khnum who made the gods out of clay, and who appeared to me in a dream last night, I was told to assume the rule of Egypt. 'I will make you to be the first of all living creatures,' he said. 'You will rise as king of Upper and of Lower Egypt, as your father Amon, who loves you, did ordain.' For he told me that Amon himself, in the guise of my father the king Tuthmose, came to my mother Aahmes and gave her his essence to bear me."

The natural amphitheatre of the cliffs creates an ideal backdrop to the temple.
In the 80s, women stepped into a politically charged workplace; expected to act and perform like men, they donned serious, tidy suits that looked much their male counterparts. Boxy-shouldered and clean-lined, women wore suit jackets to compete with men, ones that reduced femininity and emphasizing businesslike purpose.

Queen Hatshepsut was no stranger to donning the trappings of men to legitimate power; in her reign (which lasted for 20 years between 1503 and 1483 BC), she wore the garments of the male ruler, from the kilt (called shendyt) to the nemes headpiece, to the wigged beard.

Holding Onto The Reigns

Her reign looks almost accidental if one reads history swiftly. Her half-brother and husband, Thutmose II, died of a skin disease after assuming the throne. His heir, Thutmose III (both Hatshepsut’s nephew and a son by a different wife), was not yet old enough to rule, and Hatshepsut was appointed steward of his reign as Queen Dowager. Perhaps history simply handed a humble woman her role, or perhaps she took it by wile, for her political skill delayed the most powerful king of his era from taking the throne for at least twenty years.

Hatshepsut’s reign was not entirely unprecedented. Egypt was known for the freedom of its women. Several female rulers had come before Hatshepsut and some would come after, and even women of the lower castes were allowed ownership of property, inheritance from their parents, and representation in court, connoting them more rights than their Greek and Mesopotamian neighbors.

Despite this status, Hatshepsut still found it necessary to represented herself as a man, especially in the many statues and drawings that depicted her reign. In her time, much like in our own culture’s past, taking on the guise of a man would strengthen people’s faith in her leadership. Undoubtedly Thutmose III learned his political wile and statesmanship on her knee, notably from Hatshepsut’s ambassadorial trip to Punt from which she garnered many riches for Egypt in the form of gold, ebony, ivory, saplings of the myrrh plant, animal skins, and perfume. This journey was the most famous deed of her war less reign.

Every Egyptian kept one eye upon eternity, and Hatshepsut made sure that her story would not fade from time by investing in monuments and temples that chronicled her reign. One such achievement was the creation and movement of two obelisks, cut out of granite at Aswan, and conveyed to the temple of Karnak. Her greatest work was a temple at Beir el-Bahri in the Valley of the Kings, with walls adorned by stories of her life.

After Hatshepsut's mysterious death (speculated to be in 1458 BC), Thutmose III ordered all of her many monuments defaced, the name beneath the cross-dressed figure chiseled out and changed to that of his father, grandfather, or himself. Somehow, Hatshepsut’s mummy and that of her consort Senmut’s vanished from their tombs, with Senmut’s sarcophagus smashed into many pieces; their afterlife was crushed to dust. Despite all of Thutmose III’s attempts to erase her name from history, however, Hatshepsut’s carefully reconstructed life remains vivid today.

The temple was complete. Hatshepsut stood in front of it feeling for the first time as if her name would not be a grain of sand in a desert. Around her, the columns rose in a mighty rank, holding up the roof above the many statues and drawings that described the years of her reign. "It is good," she said to the overseer, climbing the steps to touch a column. Her immortality was assured.