Edfu temple and the Sacred Drama of horus

Posted by Egyptraveluxe on November 28, 2014 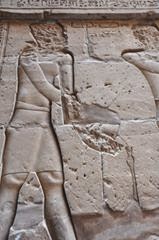 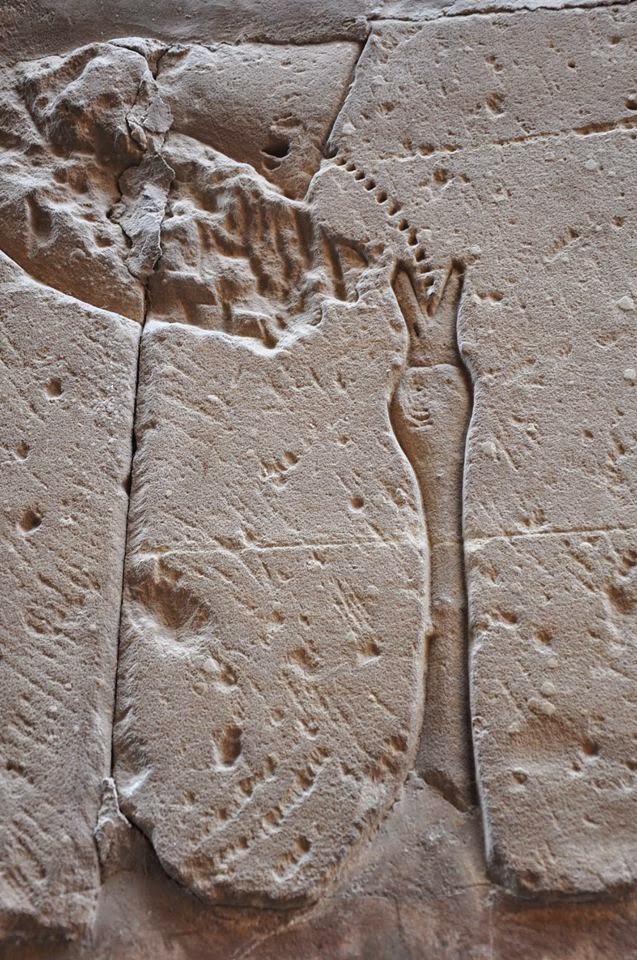 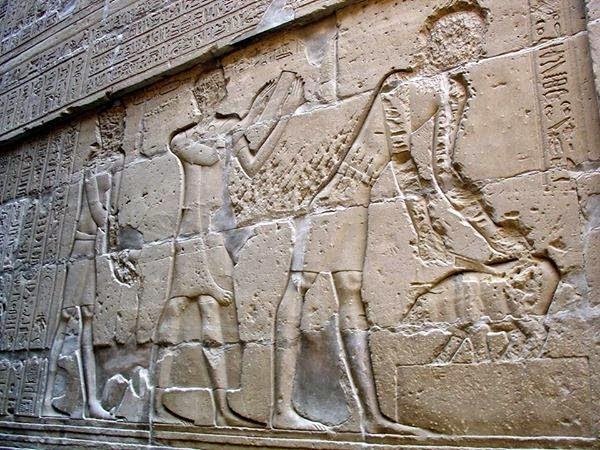 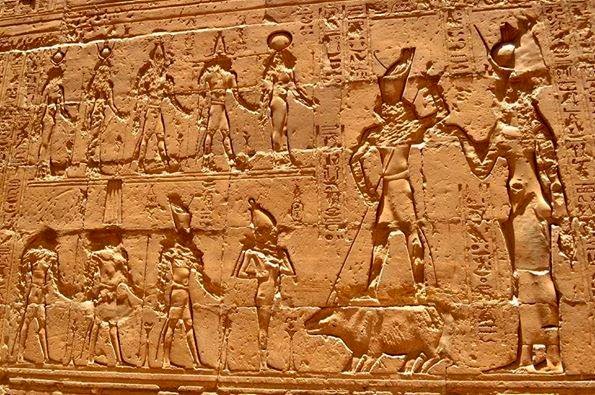 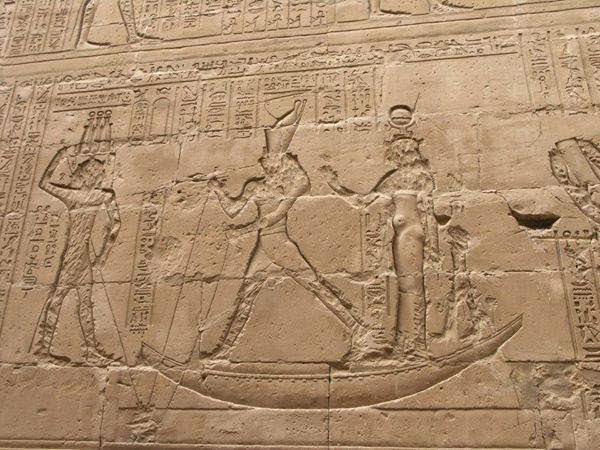 The sacred drama is to be performed during the ritual celebrations in honor of the Triumph of Horus over Seth
It consists of a prologue, three Acts (three parts), and an epilogue:
The Prologue of the Sacred Drama:
Description of the scene
-Isis wears the Sun-disk Crown with cow’s horns and the hieroglyph of Her name is above it; in Her left hand She holds the Ankh (the symbol of Life).
-Horus wears the “Pschent”, the Double Crown; the God holds an harpoon and a rope in His right hand, and the Ankh in His left.
-Thoth wears an Atef Crown with ram’s horns; the God recites from a papyrus.

-On the barque :
Horus wears the “Pschent” Crown, and with the rope in His left hand and the harpoon in His right hand He spears the hippo/Seth.
Isis wears the Sun-disk Crown with cow’s horns, and in Her left hand She holds the Ankh.
Behind Isis there is a representation of Horus-Khenty-Khety (Horus of Kem-Ur/Athribis, the capital of the X nome of Lower Egypt, the Athribite nome)
-the King wears the Hemhemet Crown (the triple Atef Crown), and with His harpoon He pierces the hipp o/Seth.

The pregnant ones among the hippos will give no birth, not one of their heifers conceives when they heard the tearing noise of Thy spear and the hissing voice of Thy blade, like the thunder in the East of Heaven, like a drum in the hands of a child:
Horus, seize him! Horus, seize him!”

The First “Act” of the Dramatic Ritual is the “Ritual of the Ten Harpoons”.
It consists of five scenes; in each scene Horus and His boat are represented twice together with His Followers, the Harpooners (“Daimones”, “Divine Spirits” of Horus).
The “Ritual of the Ten Harpoons” celebrates the ten victories of Horus against Seth on Earth, in Egypt, from Upper Egypt (the South) to Lower Egypt (the North), and each scene contains two battles: in the first scene Horus fights and triumphs over Seth in the region of Behdet/Apollinopolis Megale, and in the five and last scene the battle and the victory of Horus are located in the Eastern regions of Lower Egypt (near the border with Asia).


-THE RITUAL OF THE VII HARPOON,
On the boat Horus of Mesen, crowned with the “Pschent” snares the hippo/Seth with the rope, and pierces his testicles with the harpoon (the seventh harpoon). The hippo/Seth is lying on his back. Behind Horus there is the lion-headed Harpooner (a “Daimon”, a “Divine Spirit” of Horus) Whose name is “His speech is Fire”, with an harpoon in His right hand and a knife in His left hand.
-Words of Isis
With the harpoon in one hand you grap his hide, and make use of the rope with the other hand: Your spear has bitten his bones, and I see Your blade in his belly!
You Who are in Heaven and on Earth, fear Horus! You Who are in the NetherWorld, do Him reverence!
He has appeared in glory as a Victorious King Who has conquered the Throne of His father!
The right arm of Horus is like that of the young hunters.
Eat the flesh of the foe, drink his blood, and say to Those Who are in the NetherWorld: He is the God of Letopolis/Sekhemti, He Who slays the enemies of His mother Isis.”
-THE CHANT OF THE ROYAL CHILDREN AND THE EXHORTATIONS OF ISIS
In the large ship:
Horus of Behdet, Great God, Lord of Mesen, crowned with the “Pschent”, snares the hippo/Seth with the two ropes in His left hand, and pierces his snout with the harpoon (the “Three-barbed Harpoon”) in His right.
Isis, in the bow of the ship, snares the hippo/Seth with two ropes.
-On the shore (left) facing the ship:
The King crowned with the Hemhemet Crown (the triple Atef Crown) spears the hippo/Seth in the back of the head with the harpoon.
Behind the King there are two running men, each with an harpoon and a large dagger in the hands. They are called “the Royal Children and Crew of Horus, the Harpooners of the Lord of Mesen, the valorous Harpooners of Horus of Behdet, Who thrust to make an end of His enemies”; They are “Daimones”, the Divine Spirits of Horus.
Words of Isis to Her beloved son Horus:
“He cannot escape from Your grasp, my son Horus!
Take the harpoon, Horus, take the harpoon!
I, I am the Lady of the harpoon!
I am the beautiful and perfect Goddess,
and the loud-screamer Seth is under my power!
Appear on the bank! Make shine Your weapon at the back of the beast of prey (Seth)!
Rip open his skin, cut up his ribs!
Come in, people of Horus, and look at Horus the Victorious One!
I do not forget the night in the marshes, in the times of turmoil!
Horus, seize him! Horus, seize him!”
-ACCLAMATION TO HORUS, CROWNED AND INVESTED WITH THE REGALIA
Horus of Behdet, Lord of Mesen, standing on a podium (land) and crowned with the “Pschent” spears with the harpoon the head of the hippo/Seth.
-In the large ship:
Thoth, crowned with the Atef Crown with ram’s horns, holds in His left hand the Ankh and a papyrus roll; His right hand is uplifted towards Horus, as a sign of blessing and protection.
Horus of Behdet, crowned with the “Pschent”, holds the sceptre and the flail, the royal insignia.
-On the shore (left) facing the ship:
The Queen, standing on a podium, wears the Cow Horns Crown with two feathers, and rattles a pair of sistra in Her hands.
Behind the Queen there are six women chanting and beating drums in honor of Horus:
the first three in the upper line are the Upper-Egyptian Royal Princesses and the Women of Buto; the three Women in the lower line are the Lower-Egyptian Royal Princesses and the Women of Busiris.
-THE FIRST DISMEMBERING OF SETH,

Description of the scene (from right to left):
Isis wears the Sun-disk Crown with cow’s horns and the hieroglyph of Her name is above it; in Her left hand She holds the Ankh,and with Her right hand the Goddess supports the upraised left arm of Horus.
Horus of Behdet, Lord of Mesen, crowned with the “Pschent”, stands on the back of the hippo/Seth, spearing his forehead with the harpoon.
Facing Isis and Horus there are nine Divinities with a sceptre in Their left hands and the Ankh in Their right (Osiris Onnophris holds the sceptre and the flail, the royal insignia).
In front of each God there is an altar with the portion of the dismembered body of Seth assigned by Horus to the Gods “as a meat-offering” following the instructions of Isis.
The four Gods of the lower register, from right to left are:
Osiris Onnophris the Triumphant
Haroeris
Onuris
Upuaut
The five Gods of the upper register, from right to left are:
Tefnut
Khnum-Haroeris
Khnum
Nephthys
Isis
THE SCENE OF SECOND AND FINAL DISMEMBERING OF SETH, AND THE DECLARATION OF THE TRIUMPH OF HORUS,

Description of the scene (from left to right):
-The King, crowned with the Khepresh, the Blue Crown of War, pours grain from a cup into the open beak of a goose.

-“The Chief Lector, Scribe of the Sacred Books, Imhotep the Great, son of Ptah” wears a leopard skin and recites from a papyrus.
-A man, called “the Butcher of the Majesty of Ra who cuts the hippo” with a knife dismembers the body of the hippo/Seth.