the pilgrimage to Abydos of Userhat

Posted by Egyptraveluxe on September 02, 2014
The flotilla consists of five boats. The deceased's barque is the smallest of the five and is situated in the middle. It is surmounted by a white catafalque which covers the mummy and its coffin. The four other barques serve to haul the one with coffin. These have wooden cabins on their decks, whose sides have been painted. Close to the prow is a small platform , surrounded by boards, where the pilot and the depth sounder stand . At the stern is a helmsman. Notice that, the stern of the vessels are decorated with the usual papyrus umbel, the prow includes rare representations of the head of a lion. The barque situated behind the one with the deceased shows the rowers in action, which confirms (as well as the absence of a sail) that the boat is moving down and across the Nile from Thebes. At its prow a small scene takes place, very much full of life, which shows the depth sounder (for whom the artist has forgotten to represent the depth gauge) and the pilot.

The pilot is turned towards the rear, and, with his right hand elevated, give his instructions to the helmsman. Obviously about avoiding grounding on one of the innumerable and moving sandbars of the river. Several men are seated on the cabin, located in the middle of the boat, possibly waiting to resume their task within the funeral cortege; unless they are sailors at a loose end? 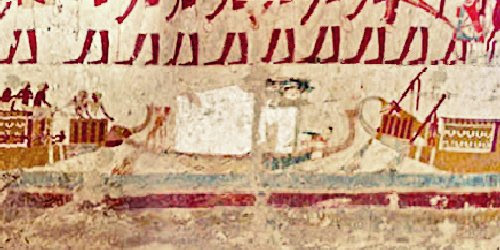 Did Userhat make this pilgrimage during his lifetime? It is impossible to know. But, no matter! Because having represented it on the wall of his tomb, the activation of the Egyptian image gives it reality, not only once, but renewed during eternity.