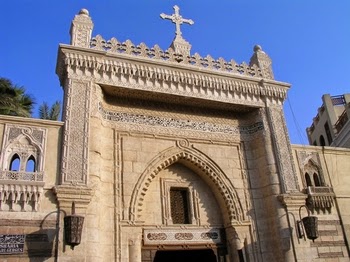 Known in Arabic as al-Muallaqah ("The Suspended"), the Hanging Church is the most famous Coptic church in Cairo. The church is dedicated to the Virgin Mary and is thus also known as Sitt Mariam or St. Mary's Church.
The Hanging Church is named for its location above a gatehouse of the Roman fortress in Old Cairo; its nave is suspended over a passage. The church is approached by 29 steps; early travelers to Cairo dubbed it "the Staircase Church." 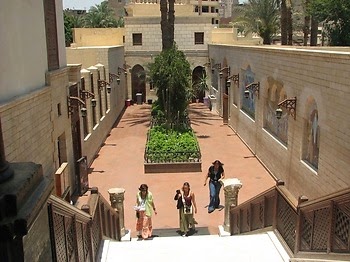 The Hanging Church was built in the 7th century, probably on the site of a 3rd or 4th century church for the soldiers of the bastion. It has been rebuilt several times since then, including a major rebuild under Patriarch Abraham in the 10th century.
By the 11th century, the Hanging Church became the official residence of the Coptic patriarchs of Alexandria and several Coptic synods were held in the church. The main furnishings - the pulpit and screens - date from the 13th century. 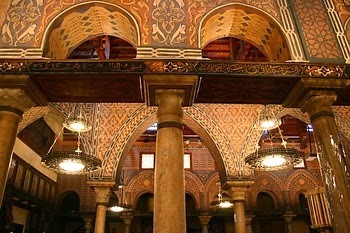 Entrance to the Hanging Church is via a beautifully-decorated gate on Shar'a Mari Girgis Street. This leads into an open courtyard, flanked by mosaics, from which there are 29 steps to the church. At the top of the stairs are three wooden doors decorated with geometric patterns, framed with decorative carvings in the stone wall.
Inside, only the section to the right of the sanctuary, above the southern bastion, is considered original. Nevertheless, the Hanging Church remains one of the most impressive churches in the city, remarkable for its marble pulpit, inlaid screens, icons and murals. The timber roof of the nave recalls Noah's Ark.
The 11th-century marble pulpit surmounts 13 graceful pillars, representing Jesus and the 12 disciples. As customary in Coptic churches, one of the pillars is black, representing Judas, and another is grey, for doubting Thomas. Its steps are carved with a shell and a cross.
The oldest icon in the Hanging Church dates from the 8th century. Many other artifacts from this church are now displayed in the Coptic Museum, including a lintel showing Christ's entry into Jerusalem that dates from the 5th or 6th century. 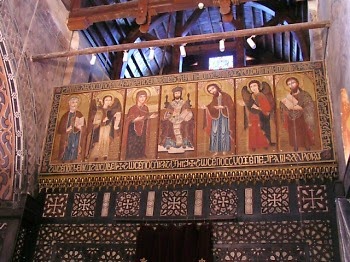 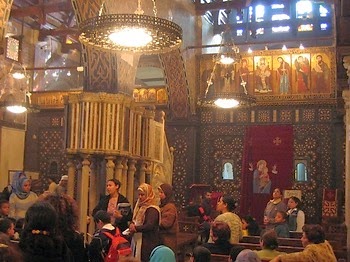 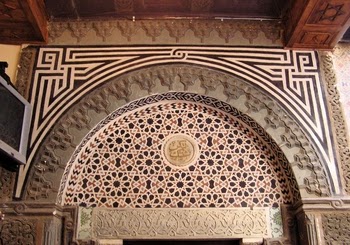 Set out on a tour of Cairo and visit the places that were instrumental in the evolution of Christianity during your tour of Egypt. The Coptic Museum in old Cairo houses a rare collection of the first Christian relics, architectural ruins, textiles, icons and old manuscripts. Explore Qasr El Shama (old Cairo), renowned for its ancient churches.

The Suspended Church of El Moallaqa, built at the turn of the 4th century, is worth a visit. Standing on the remains of the Roman fortress of Babylon, it houses a beautiful wood carving depicting Jesus Christ entering Jerusalem. Take this tour and get a glimpse into the religion and culture of Egypt.
http://www.egyptraveluxe.com/cairo_day_tour_christian_tour.htm
Cairo Hanging Church
Location: Cairo, Cairo Governorate, Egypt