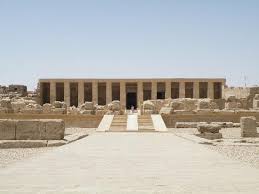 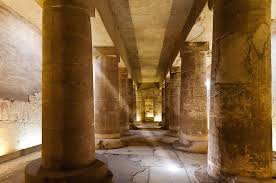 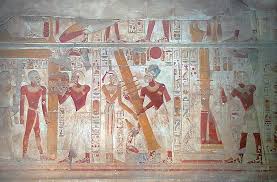 For the Ancient Egyptians, Abydos was one of the holiest sites in the world. As the cult center of the god Osiris and gateway to the underworld (believed to lie under the nearby hills), it was a popular place of pilgrimage and burial. Today, Abydos is a large archaeological site in northern Upper Egypt, often visited in conjunction with nearby Dendera. Today the pilgrims are New Age devotees following in the footsteps of Dorothy Eady (d. 1981), who believed herself to be the reincarnation of an Abydos temple priestess. The main monument at Abydos is the Temple of Seti I, built around 1300 BC by Seti and his son Ramses II. It is especially notable for its fine reliefs, considered among the best of the New Kingdom.

Abydos has been used as a burial site and sacred site since predynastic history. It was originally sacred to the jackal-headed god Wepwawet, who "opened the way" to the realm of the dead. Anhur appeared in the XI Dynasty at Abydos; Anubis rose to importance in the Middle Kingdom then vanished in the XVIII Dynasty. The worship of Osiris in his various forms appeared at Abydos in the XXII Dynasty and became increasingly important, until the entire site was considered sacred primarily to him by the XIX Dynasty. The Temple of Seti I at Abydos was begun during the reign of Pharoah Seti I (1318-1304 BC) and completed by his son Ramses II (1304-1237 BC) during the XIX Dynasty of the New Kingdom. The temple represents an artistic revival of Old Kingdom forms and was part of Seti's attempt to consolidate the Ramessid dynasty after the losses under Akhenaten. By identifying himself with the great gods and previous rulers of Egypt, Seti added legitmacy to a ruling family that had been mere warriors just a few generations ago. Pharaoh Merneptah added a great Hypogeum of Osiris to the temple of Seti. The final building to be added was the Temple of Nectanebo I in the XXX dynasty, but various additions to the site were made through the Ptolemaic and Roman periods. Thanks to its impressive carvings, the Temple of Seti I has been a tourist attraction since the 1830s. Abydos began to be excavated in the early 20th century by Flinders Petrie and excavations still continue today. In more recent times, Abydos was the home of New Age practitioner Dorothy Eady from 1946 until her death in 1981. Mrs. Eady believed herself to be a reincarnation of an Abydos temple priestess and lover of Seti I, was known as Umm Seti (Mother of Seti), experienced trances and uttered prophecies. More details can be had in her book Abydos: The Holy City in Ancient Egypt and the biography by Jonathan Cott, The Search for Omm Sety.

The site of Abydos is huge, and includes a number of ruins and mounds around the edge of the desert. Most visitors, however, stick to the grand Temple of Seti I because of time and police restrictions. The Temple of Seti I has an unusual L-shaped layout and multiple sanctuaries, but otherwise incorporates the elements common to Egyptian temples. Entrance is on the north side, where the pylon and forecourt are mostly destroyed but still contain some partial reliefs (such as Ramses II defeating enemies at Qadesh, on the left side of the forecourt). Stairs lead from the forecourt to the upper second court, where damaged statues are displayed. Overlooking the second court is a facade with square pillars covered with reliefs of Ramses II greeting Osiris, Isis and Horus. The upper part of the facade has been rebuilt in concrete. The Outer Hypostyle Hall contains sunk-reliefs completed by Ramses II after Seti's death. They are not very impressive, suggesting that Ramses redeployed Seti's best craftsmen to work on his own temple, the Ramesseum. On the entrance wall, Ramses measures the temple with the goddess Selket and presents it to Horus. On the right wall, Ramses offers a falcon-headed box of papyrus to Isis, Horus and Osiris and is led to the temple by Horus and the jackal-headed Wepwawet to be anointed with holy water (represented by interlinked ankhs). One of the roof lintels in the Outer Hypostyle Hall bears a cartouche that has become famous for including the so-called "Abydos helicopter." Internet theorists hold that the ancient engraving shows a helicopter and submarine; archaeologists disagree and explain the unusual shape as resulting from erosion and the layering of one cartouche over another. The Inner Hypostyle Hall, made of sandstone on the east and west sides and limestone on the north and south, was the last part to be decorated before Seti's death. Some sections remain incomplete, but the reliefs that were finished are excellent. On the right wall, Osiris and Horus prou holy water from garlanded vases over Seti, who makes offerings before the shrine of Osiris. Osiris is attended by Maat and Ronpet (goddess of the year) in front and Isis, Amentet (goddess of the west) and Nephthys in back. Seti's profile bears a close likeness to his mummy, which is on display in the Cairo Antiquities Museum. The reliefs on the back wall are still brightly colored, and show Seti being anointed and crowned by the gods. An especially notable section is high on the left, between the sanctuaries of Ptah and Re-Herakhte, with Seti kneeling before Osiris and Horus with the sacred persea tree in the background. Two projecting piers on the side walls near the back of the hall show Seti worshipping the Djed column while wearing the combined crown of Upper and Lower Egypt. Behind the Inner Hypostyle Hall are seven sanctuaries, which contain the best reliefs in the temple. From left, the small sanctuaries are dedicated to Seti I, Ptah, Re-Herakhte, Amun, Osiris, Isis and Horus. Each one is roofed with false vaults carved from rectangular slabs and end in false doors (except for Osiris' sanctuary, which has a real door to his inner sanctuaries). The reliefs in the Sanctuary of Seti emphasize the pharaoh's recognition by the gods, who are shown leading him into the temple and ceremonially uniting the Two Lands (Upper and Lower Egypt) along the northern wall. Near the back of the left wall, Seti receives a list of offerings from Thoth and leopardskin-wearing High Priest Iunmutef. Seti is lastly shown leaving the temple on a palanquin borne by jackal-headed (from Upper Egypt) and hawk-headed (from Lower Egypt) deities. Behind the seven sanctuaries are the inner sanctuaries of Osiris, with three side chapels dedicated to Isis, Seti and Horus respectively. The reliefs in these chapels retain much of their bright colors, but have been blackened by mold in the last few decades. The portal nearest Seti's sanctuary leads into the columned Hall of Sokar and Nerfertum (deities of the north representing the cycle of death and rebirth, who were integrated into the cult of Osiris) in the southern wing of the temple. Reliefs include Seti receiving Sokar (with hawk's head) and Nefertum (in human and lion form, crowned with a lotus blossom). In the Chapel of Sokar, Osiris returns to life grasping his phallus, while Isis hovers over him in the form of a hawk on the opposite wall. The Chapel of Nerfertum requires a flashlight to see anything in. Another portal a little further from Seti's sanctuary leads into the Gallery of Kings, named for the list of Seti's predecessors carved into the right wall. Hatshepsut and Akhenaten (with his heirs) are omitted from the list in accordance with custom, and Seti's own name is listed as Menmare Osiris-Merneptah instead of Menmare Seti-Merneptah in order to distance himself from Seth (a.k.a. Seti), the enemy of Osiris. Seti and Ramses II are depicted facing the list, which has proved very useful to archaeologists and historians. From the Gallery of Kings, a side corridor leads past a relief of Seti and Ramses harnessing a bull and running to greet Wepwawet. From here, a rear door leads behind the temple to the Osireion, the cenotaph or "dummy tomb" of Seti I. Osireions did not contain pharaohs' mummies but were intended to promote a close association between the pharaoh's ka and Osiris. Seti's is the only one of these now visible, but it is still half-buried and partly inaccessible by stagnant water. The Osireion is made of massive blocks and encloses a room that once contained a mound surrounded by a moat, symbolizing the primal mound that arose from the waters of Chaos at the dawn of Creation, and an empty sarcophagus. About 300m northwest of the Temple of Seti I is the ruined Temple of Ramses II. Fragments of reliefs showing the Battle of Qadesh survive on the enclosure walls and pillared courtyard.