Tom and Jerry in pharaohnic Egypt

Posted by Egyptraveluxe on February 09, 2013
Tom  and Jerry in pharaohnic Egypt ,this is a scene back to nearly 1400 BC. ,Where the artist depicted one of the priests as a mice mocking at him while the chief of artisans as the cat who forced to serve him propriety .
This is known as Ostraka piece and it is one of thousands other similar ostrakas were found near the artisans village of Deir Elmadina -Luxor west bank.
Ostrakas for ancient Egyptian artist is a stone sketch board . 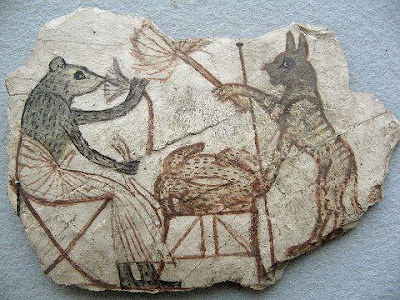