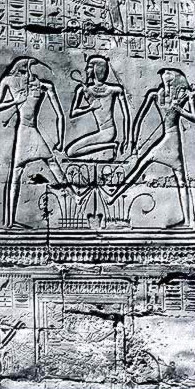 In the next series of scenes on this wall, in the upper register and clearly defined, we find the king kneeling on the sma symbol. He is flanked by Thoth, master of the city of the Eight (Heliopolis) on the left and Horus, great god, master of Mesen.t. Hence, the king is joining the Two Lands of the North and South "under his feet", and the gods are assuring him of the monarchy. The horizontal bar on which the king is kneeling always indicates a significant measurement.
In the lower register, the barque of Amun is resting in a large naos (of which only a small part of the uraei frieze of the dais can be seen). Before it sits the barques of Khonsu and Mut. All of these wall sculptures are rendered in sunk relief, with the exception of the naos of the barque.