Posted by Egyptraveluxe on November 11, 2012 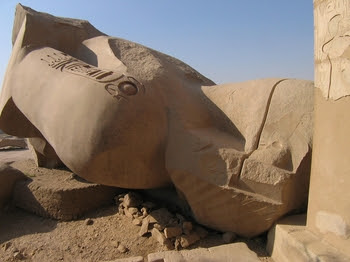 Were it still standing, the Ozymandias colossus of Ramses (celebrated by poet Percy Bysshe Shelley in his sonnet "Ozymandias") would tower 20 meters above the ground, rivaling the Colossi of Memnon and the statues of Ramses carved into the mountain at Abu Simbel.
The name "Ramesseum" – or at least its French form, Rhamesséion – was coined by Jean-François Champollion, who visited the ruins of the site in 1829 and first identified the hieroglyphs making up Ramses' names and titles on the walls. 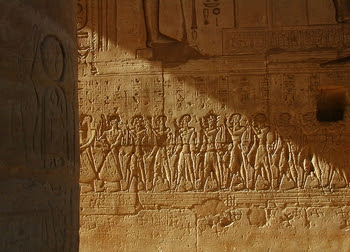 The design of Ramses's mortuary temple follows the standard designs of New Kingdom temple architecture. The main building, dedicated to the funerary cult, comprised two stone pylons (gateways, some 60 m wide), one after the other, each leading into a courtyard. Beyond the second courtyard, at the center of the complex, was a covered 48-column hypostyle hall, surrounding the inner sanctuary.
As is customary, the pylons and outer walls were decorated with reliefs commemorating the pharaoh's military victories and leaving due record of his dedication to, and kinship with, the gods. In Ramses' case, much importance is placed on the Battle of Kadesh (ca. 1285 BC). 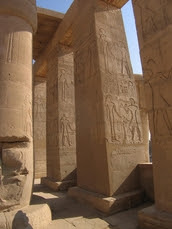 Especially intriguing is one block atop the first pylon, which records his pillaging, in the eighth year of his reign, a city called "Shalem," which may or may not have been Jerusalem.
Adjacent to the north of the hypostyle hall was a smaller temple; this was dedicated to Ramses's mother, Tuya, and his beloved chief wife, Nefertari.
To the south of the first courtyard stood the temple palace. The entire complex was surrounded by various storerooms, granaries, workshops, and other ancillary buildings, some built as late as Roman times.
A cache of papyri and ostraca dating back to the third intermediate period (11th to 8th centuries BC) indicates that the temple was also the site of an important scribal school. And neither was this a virgin plot when Ramses had the first stone put in place: beneath the hypostyle hall, modern archaeologists have found a shaft tomb from the Middle Kingdom, yielding a rich hoard of religious and funerary artifacts. 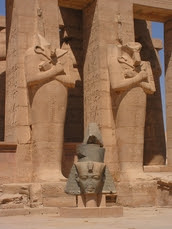 Ramses II was a 19th dynasty pharaoh of Egypt. He ruled for 67 years during the 13th century BC, the apogee of Ancient Egypt's power and glory.
This extraordinarily long reign, the wealth available in the state coffers, and, undeniably, the pharaoh's personal vanity meant that Ramses, of all the ancient rulers, left what is perhaps the most indelible mark on the country. His legacy can be seen most clearly in the archaeological record – in the many buildings that Ramses modified, usurped, or constructed from the ground up.
Most splendid of these, in accordance with New Kingdom Royal burial practices, was his memorial temple, the Ramesseum – a place of worship dedicated to pharaoh, god on earth, where his memory would have been kept alive after his passing from this world. Surviving records indicate that work on the project began shortly after the start of his reign and continued for 20 years.
Unlike the massive stone temples that Ramses ordered carved from the face of the Nubian mountains at Abu Simbel, the inexorable passage of three millennia was not kind to his "temple of a million years" at Thebes. This was mostly due to its location on the very edge of the Nile floodplain, with the annual inundation gradually undermining the foundations of this temple, and its neighbours. Neglect and the arrival of new faiths also took their toll: for example, in the early years of the Common Era, the temple was put into service as a Christian church. 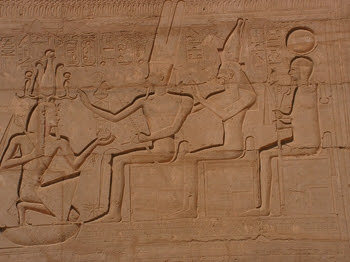 This is all standard fare for a temple of its kind built at the time it was. Leaving aside the escalation of scale – whereby each successive New Kingdom pharaoh strove to outdo his predecessors in volume and scope – the Ramesseum is largely cast in the same mould as Ramses III's Medinet Habu or the ruined temple of Amenhotep III that stood behind the "Colossi of Memnon" a kilometre or so away. Instead, the significance that the Ramesseum enjoys today owes more to the time and manner of its rediscovery by Europeans. 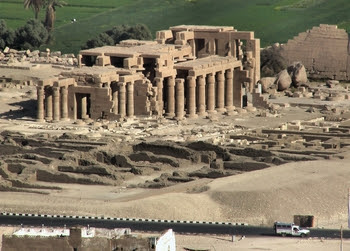