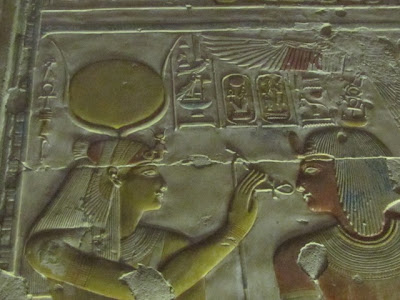 The area between the modern villages at Abydos and the desert which stretches westwards to the limestone mountain contains the captivating remains of the ancient Egyptian civilisation dating from the Predynastic period to Christian times. The mountain has a curious crescent shape surrounding the villages and in its centre is a gap (known as Pega-the-Gap) believed by ancient Eg 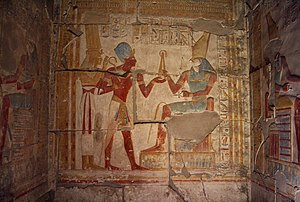 There are numerous animal cemeteries in the desert at Abydos, including dogs, falcons and ibis. An Egyptian archaeological mission at Abydos announced in 2002 the discovery of an important cemetery of Horus. Large earthenware sarcophagi containing mummified falcons (some wearing gold masks) have been found in the tombs along with falcon eggs. It has been dated to the Ptolemaic era.

yptians to lead directly to the kingdom of the dead. Perhaps this was why the Thinite kings chose this area as their burial place from earliest times. From the beginning of the Old Kingdom the area was the sacred centre of the cult of Osiris.

Broken pottery at Umm el-Gab
The earliest significant remains are the tombs of Protodynastic and Early Dynastic rulers whose names have been found on stelae at the tomb entrances. Pilgrims would later come from all over Egypt to pay their respects at the ‘Tomb of Osiris’ – a case of mistaken identity for the tomb of Djer of Dynasty I. Offerings of little pots would be smashed on the sandy hills surrounding the tomb and so the area later became known as Umm el-Qa’ab or ‘Mother of Pots’. This pottery still litters the desert at Abydos today making it difficult to walk in some places without crushing it. 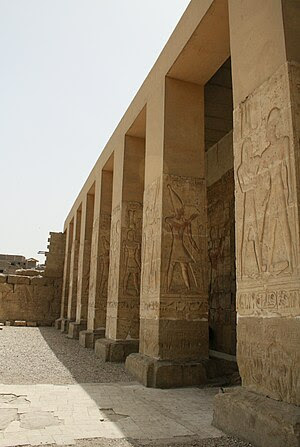 Egyptologists have taken a great interest in Abydos since the earliest excavations in the 19th century, but it is not until recently that more scientific investigations have filled in the gaps in the history of the area. In 1977 the area was re-excavated by the German Archaeological Institute and one of the first finds was an ivory label bearing the name of Narmer which confirmed the king’s victory over the people of the Delta and the final events of the unification of Egypt. They also discovered that kings were buried at Abydos before our known Dynasty I.


The desert is divided up into several cemetery areas. The German team uncovered a new tomb in the area known as cemetery U which contains hundreds of graves and offering pits. Tomb U-j, an elaborate brick-lined structure containing 12 chambers, was by far the largest of its date found in Egypt and has been attributed to an important chieftain or king of the Predynastic period. At the beginning of Dynasty I the royal tomb consisted of a mound of rubble or sand which covered a deep rectangular brick-lined chamber. With each generation the tombs became more elaborate and were often surrounded by subsidiary burials of wives, servants and pets.

Some of the early royal tombs to be identified at Abydos belong to kings Djer, Djet, Den, and Queen Mer-Neith of Dynasty I, and Peribsen and Khasekhemwy of Dynasty II. The tomb of Den is currently being reconstructed and the retaining walls of the mound can still be seen. The largest and latest royal tomb to be built at Abydos is that of King Khasekhemwy, which has recently been undergoing re-excavation.


Associated with each of the royal tombs was a ‘palace of eternity’ or funerary enclosure which are currently thought to be mudbrick prototypes of the earliest pyramids. The enclosure of Khasekhemwy is the only one of these structures which is clearly visible today. It is locally called Shunet el-Zebib (Shuna = storehouse and Zebib may come from Pa Hib, meaning ibis) and it was used as a repository for thousands of mummified ibis in the Late Period. The early structure however has double walls 11m high with the inner ones similar to the niched façade which encloses the Step Pyramid of Djoser at Saqqara. The enclosure measures an impressive 122m from north to south and 65m from east to west, with its massive inner walls 5.5m thick. There are few clues within the structure to how it was used in ancient times, but recent excavations have uncovered a low mound in its centre which is thought to be of religious significance. There have also been 14 boat pits, discovered since 1991, containing the world’s oldest boats, surrounding the enclosure of Khasekhemwy. This remarkable find is being painstakingly excavated and is revealing new evidence about the wealth, power and technological prowess of the earliest periods of Egyptian history. The vessels, which date to around 3000 BC, have been found to predate Khasekhemwy’s funerary enclosure and are thought to be viable boats intended for the use of the king in his afterlife. Two of the pits excavated contain wooden boats which were filled in with brickwork, each shaped like a boat itself. The American excavation team, directed by Dr David O’Connor and conducted under the Egyptian Supreme Council for Antiquities hope to find more evidence for dating the boats and also hope to gain a better understanding of the early Egyptian royal fleet by further investigation and conservation of the remains. The remaining mudbrick walls of another Dynasty II enclosure can be seen nearby and was re-used to contain the 7th century AD Coptic church of Deir Sit Daminia, now used as a village. Shunet el-Zebib and the Coptic village can be found to the north-west of Beni Mansur.

A cemetery in the north of the Abydos desert area near Shunet was the main burial place of Middle Kingdom elite which was used continuously through to Graeco-Roman times. 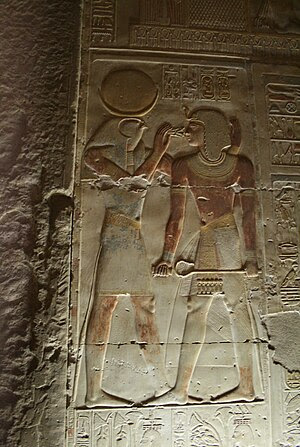 Kom es-Sultan is another impressive mudbrick structure to the east of Shunet el-Zebib which has been dated to the Middle Kingdom. Apart from surrounding the site of the earliest Temple of Osiris (or Khenty-Amentiu) in Abydos, little is known about the structure itself, although the only known statue thought to be Khufu, builder of the Great Pyramid at Giza was found here. A good part of the walls are still standing but only a few blocks now remain to give us a glimpse of the temples they contained. Huge numbers of stelae have been plundered or excavated from this area which have provided a great deal of information on the cult of Osiris. Adjoining the enclosure is a recently excavated portal temple, built by Rameses II. To this day a wide beaten path through the desert leads from Kom es-Sultan to Umm el-Qa’ab, indicating the route of pilgrims over the millennia.


Walking the desert to the north and west of Abydos the visitor cannot help but feel the antiquity of the area. Low sand-covered mounds everywhere hide tombs and shrines of early pharaohs, much of it still unexcavated, while vast tracts of smashed pottery attests to the millions of ancient Egyptians who performed their pilgrimage to this sacred place to fulfil their obligations to Osiris.

Remains of a small step pyramid, known as the Sinki Pyramid, found about 8km south of Abydos near the village of Naga el-Khalifa, have been investigated by Nabil Swelim and Gunter Dreyer in recent years. The pyramid, which was constructed of limestone and mortar, now reaches a height of 4m. The structure includes remains of mudbrick ramps which reached up to the second level and were presumably used to bring in building materials. This is one of nine small pyramids dating to the earliest dynasties of Egyptian history found along the Nile Valley, but their purpose is as yet unknown. The pyramid had been robbed of its stone over the millennia and although, like the others of its kind, there is no burial chamber or associated chapels, there have been 14 secondary graves dating to the Old and the New Kingdom found nearby.
— at Egypt,Abydos.