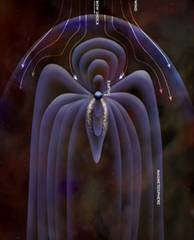 One of the birth names given to Mars was Tutankhamun. The pectoral below spells Tutankhamun's throne name Neb-Khepru-Re. This translates as 'The Lordly Manifestation of the Sun.'
With the GKS we've no need to twist or contort or demote such a title as belonging to a weird world we don't understand, we simple take it at face value!
The sun in ancient times appeared as a red orb and Mars numerous times also appeared as a red orb, so what we have here is Mars/Tutankhamun literally ‘the image or manifestation of the sun.' It is the very reason why the divine astral monarchy also adorned the ubiquitous title sa re which translates as 'son of the sun.' All planetary bodies as they moved back and forth to earth in the guise of godly kings and queens were naturally deemed as offspring of Re, one of the original creator gods. 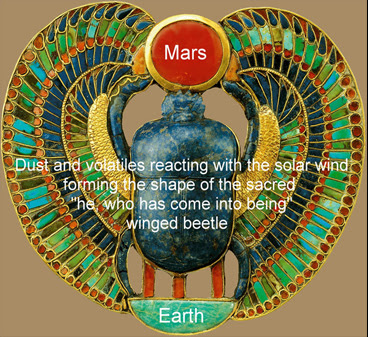 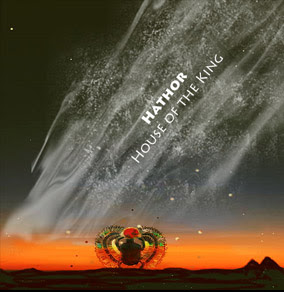 The illustrations below show the effect of the solar wind (charged particles) on earth's magnetosphere and although these electrical currents are invisible if we were to throw in a little dust and debris these electrical ‘loops and tails' would be rendered completely visible. An analogy would be effect of this electricity when entering earth's North and South Pole - the Aurora Borealis or northern and southern lights. These shimmering neon lights appear in different colours and shapes (rays, glows, curtains and pulsating patches) and are the result of charged particles reacting with the earth's atmosphere.

With Tutankhamun's pectoral I am suggesting that this beautifully crafted brooch came about as a direct result of physical observations of Mars in close proximity to earth being bombarded by the solar wind. In other words there was no ‘art for arts sake,' the Egyptians crafted EXACTLY what they saw! No pseudo surreal world of make believe as most would have us believe; no inventing of a invisible fictitious god to explain the motion of the sun (Re) across the sky (he had a boat of ‘millions of years' for this!), just a very real world dominated by cosmic chaos.
Mars/Tutankhamun bombarded by the solar wind and in doing so manifesting the shape of a gigantic blue coloured winged beetle in its wake. Dust and volatiles granting otherwise invisible electrical phenomena complete visibility in the shape of a winged beetle.
The Egyptians may have been naive but they were not stupid. This is the reason why the sacred scarab Khephri was known as “he who is come into being.” A deity who self-created himself seemingly from nothing; a god who self-created himself numerous times over as the solar wind reacted with planetary bodies when moving back and forth to earth in the guise of god kings and queens.
During the reign of Amenhotep III (Mars) unusually large scarabs were produced en-mass. This is no coincidence and further corroborates the GKS. Amenhotep III was a guise of Mars (as were all pharaohs called Amenhotep) and this is a time just prior to the birth of Mercury from Mars or in Egyptian terms, a time prior to the Amarna period and the exaltation of the Aten.
Let me make this very clear, the so-called Aten or ‘disk of the sun' has nothing at all to do with the sun, this is a ridiculous notion. To suggest the Egyptians up and renamed their pre-eminent sun god Re as the Aten shows a poor understanding of ancient minds - the Aten was originally the core of Mars, or as we now call it the planet Mercury. It was literally sucked out through the Valles Marineris ( 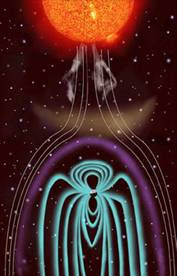 enormous gash still visible on the surface of mars) sometime in the 7th century BC as a result of repeated encounters with earth. This was the beginning of the end of planetary chaos. After the birth of the Aten and the Amarna period (approx. 17 years) cosmic chaos although continuing for at least another 7/800 years began to settle down allowing the planets to retreat to their present locations.
Now, the reason why large scarab beetles were produced by the cartload prior to the Amarna period is because Mars/Amenhotep came very close to earth and ‘he who has come into being' CAME INTO BEING numerous times over. Further, because Mars was drawn in closer to earth than previous encounters, the self manifested Khephri beetle appeared larger than normal, and as a result, the Egyptians produced larger scarabs.

I would also add Amenhotep III was given title ‘the dazzling sun disk of all lands.' I've yet to here anything close to a plausible explanation for such a title. I mean, how can any human being be described as a 'dazzling sun disk?' This is Mars/Amenhotep again, just prior to giving birth to its sold iron core; Mars/Amenhotep in the process of belching out the Aten and in doing so Mars/Amenhotep quite literally appearing as a ‘dazzling sun disk of all lands.' This definition requires no ‘shrugging of the shoulders,' no demoting the Egyptians as living in a bizarre world we don't understand, just real physical observations leading to apt and concise descriptions of planetary bodies in the guise of divine kings and queens.