The Rosetta Stone: A History of the Sacred Characters 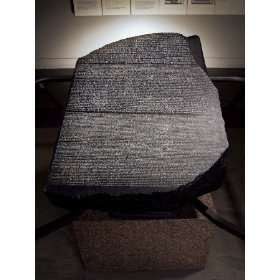 For over two thousand years, the secrets of the ancient Egyptians were lost to history. All the tombs, trinkets, statues and cenotaphs were pretty but indecipherable, covered as they were in a pictographic script that had no meaning. It wasn’t decades of research, the intricate technologies of archaeology or the explanation of some ancient king risen from the dead that unlocked the lost language of the ancient Egyptians. In fact, it was the accidental discovery of some half buried rock that came to be known as the Rosetta stone, by a French soldier that would change the face of Egyptology and provide a much needed window into the language and belief systems of the most celebrated ancient culture. 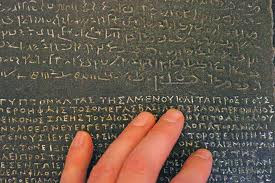 It was 1799 and Napoleon’s troops were preparing to defend against the encroaching Ottoman Army as they grew closer and closer to the city of Rosetta on Egypt’s West bank just miles from the sea.  As they cleared away rocks to improve their fortifications, a small group of soldier engineers led by 28 year old Lieutenant Bouchard discovered a large polished rock with a dark surface and what seemed to be some engraved text.
On closer inspection, Bouchard noticed three separate texts on the rock: hieroglyphs at the top, an unknown text in the middle and Greek at the bottom.  It was not just the middle text that didn’t make sense; it was the stone’s location inside an Arab fort far from the ancient tombs in Luxor’s Valley of the Kings. Speculation as to possible ancient structures below the fort were quickly dismissed and the stone sent to Cairo for further research by Napoleon’s famed Commission of Arts and Sciences.
The stone was almost a meter high with missing pieces at the top and bottom right. After a thorough cleaning the group of French scholars was able to read the Greek inscription. It was nothing sensational, just an inscription of an anniversary. That was until they read the last sentence.  “This decree shall be inscribed on stelae of hard rock, in sacred characters, both native and Greek, and they shall be erected in each of the temples of the first, second and third category, next to the image of the king living eternally.” 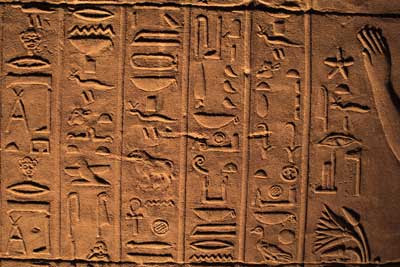 The realization that what was written in Greek was also written in hieroglyphics was a revelation. Finally, here was the chance to understand what the ancients had been whispering for all these centuries.  A group of notable scholars and archeologists gathered in Cairo to work on the stone, including trying to figure out what the middle language on the Rosetta stone actually was.

Copyists went to work, reproducing the text on the stone and disseminating it to colleagues around the world. Although other texts had been discovered, the connecting language, the middle language on the stone, remained a mystery. It wasn’t Aramaic and it wasn’t Coptic. And in 1801, the British stole the stone making its middle text even more elusive for its French discoverers.
Through the dedicated efforts of Jean Francois Champollion, a French scholar who was only nine years old when the stone was first discovered by Bouchard, the text and dictionary of ancient Egyptian


languages was first published. His work showed that the ancient text didn’t contain vowels and used pictures to represent both sounds and statements.
To this day, the Rosetta stone sits in the British Museum, a highlight of the Egyptian collection and a testament to perseverance and scholarship.  The ability to read hieroglyphics helped archaeologists and Egyptologists to understand the succession of dynasties, the religion and cults of the dead, the ancient gods and their followers and of course, the secret world of one history’s most fascinating cultures - Ancient Egypt.
The Rosetta Stone: A History of the Sacred Characters
Location: Rosetta