Cosmic Catastrophe through the ages

Recent planetary chaos is staring us in the face via ancient history and what better way to prove this than by using the glorious carved reliefs, paintings and art of the Egyptians. It is presumed the reader has a basic understanding of the GKS although as we’re dealing with images it's not essential.
Wars in the heavens 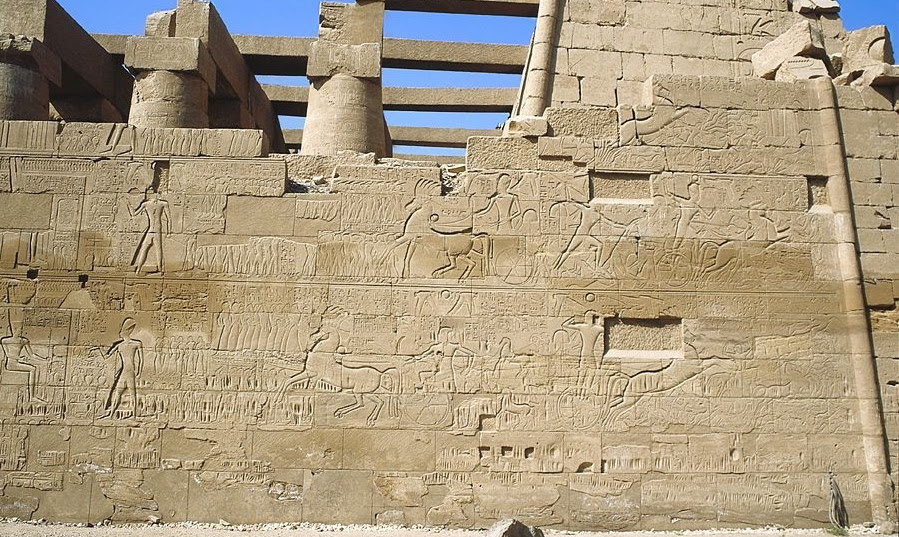 Description: A section of the North facade of the Hypostyle Hall at Karnak depicting Seti I returning with captives and leading chariot attacks on the Libyans. Photo: Credit Jon Bosworth.

there is no archaeological evidence whatsoever to verify ANY of the hundreds of Pharaonic battles supposedly fought over a 3,000 period. This is because they are all time honoured recordings of wars in the heavens - they have little if anything to do with events here on earth.

Seti ("he of the god Seth") was one of the many god kingly names given to Mercury shortly after its birth from Pharaonic Mars. We have Mercury, personified as the warrior god king Seti. Seth. The god of evil was invoked in the descriptive title Seti as a result of the mayhem Seti/Mercury caused in the skies above (and to a certain extent below).  It was hoped that by venerating 'evil' in this way the Egyptian god Seth embodied in Seti/Mercury would rid the skies of the vile armies of asteroids that perennially threatened to not only blot out the red Sun but also prevented access to Upper Egypt, the duel land above.

Seti/Mercury is depicted returning with bound captives (trailing bodies) as well as fearlessly leading chariot attacks and 'smiting' the 'fair skinned' army of cometary bodies which perennially invaded the western skies - the Egyptian's called them the Libyans after the people that lived in the West (as above, so below).
Although some have been eroded you will note the orbs above Seti/Mercury's head. These were all once painted the traditional deep red (same as the red sun) and are actual physical representations of the body of Seti/Mercury - they are not the Sun. The orbs on the back of the horses and the 'cometary tailed' headdress are symbolic of cometary bodies leading Seti/Mercury into vast armies of opposing astral bodies.
Planetary chaos brought about a sky dominated by auroral manifestations - magical shimmering neon lights observed day and night courtesy of a red Sun. This phenomenon was deified as the god Amun. Epithets such as "one whose true form could never be known" and "the hidden one" along with Amun's trademark plumed headdress which represented the magical shimmering multi coloured curtained shaped lights, completely consistent with my identification. Given a sky filled aurora it is no wonder Amun was known as "the king of the gods." The aurora/Amun as recorded outranked all with its dominance.
On the left Seti/Mercury can be seen offering to the omnipresent aurora/Amun. Many god kings planets are shown in similar pose. It was under Amun's (the aurora) authority kingship was granted.

In the aftermath of the numerous sky battles fought by the god king planets clouds of debris would envelope the planets, this was basically perceived as the spoils of war - booty and such like. And since the planet kings appeared amidst the aurora, this was perceived the sky pharaohs offering to the omnipresent aurora. Look at it this way, Amun was a sky god, this is undisputed by scholars, so unless we invoke a surreal would of make believe how could a human interact with a sky god in this way? At least my interpretation places both god king and Amun together in the heavens where they belong. 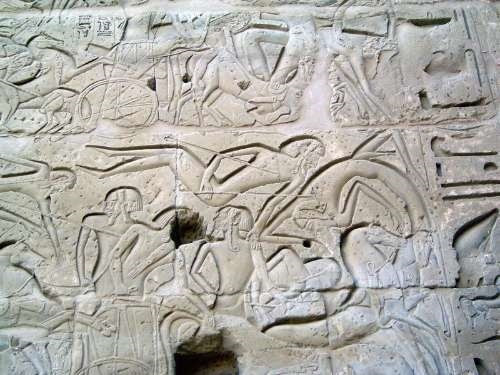 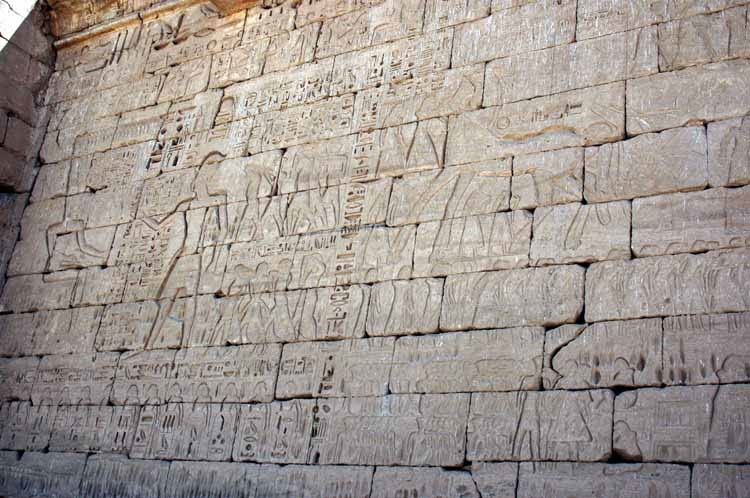 Ramesses/Mars presenting to the god of the aurora, Amun (left) a group of bound prisoners. The King is always shown larger than ordinary folk because as a planetary body he physically was. He is shown equal in size to the gods because he occupied the domain of the gods - the sky. This is the very reason the god kings of ancient times were intermediaries between the mortal and the divine. 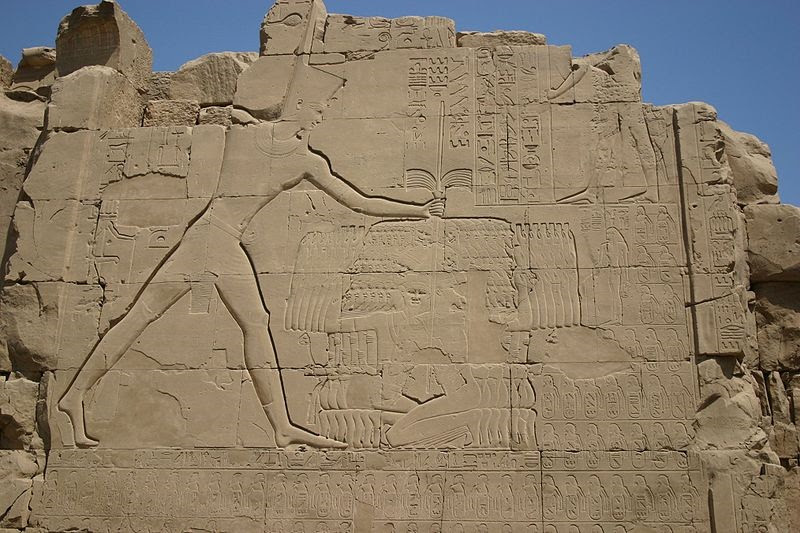 The Moon in the guise of Tuthmosis III ("born of the lunar god Thoth") in the iconic pose of smiting an enemy. 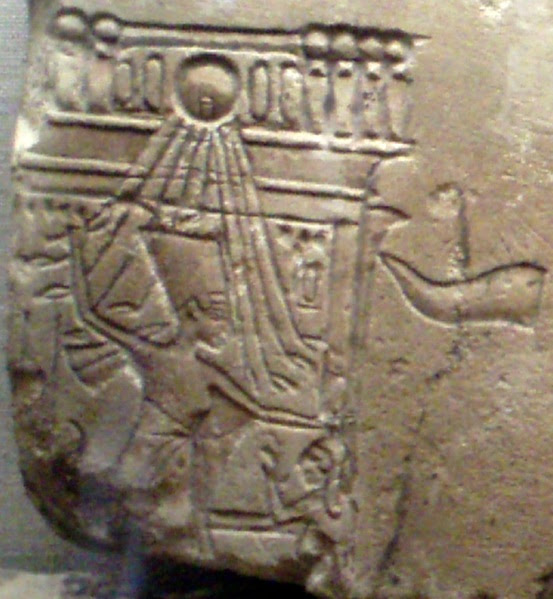 Detailed close-up of a limestone relief originally from Amarna depicting Nefertiti smiting a female captive on a royal barge. Nefertiti was a guise of Venus and this is one of the very rare occasions when Venus came close enough to earth to be observed emulating the warrior kings (Mars, Mercury and the Moon) smiting enemies - Nefertiti/Venus seemingly crashing headlong into tons of debris. The disk shown here with partial rays ending in hands is the newly born Mercury or as the Egyptians called it the Aten. The rays of the Aten/Mercury are giving life or shining on Nefertiti/Venus. 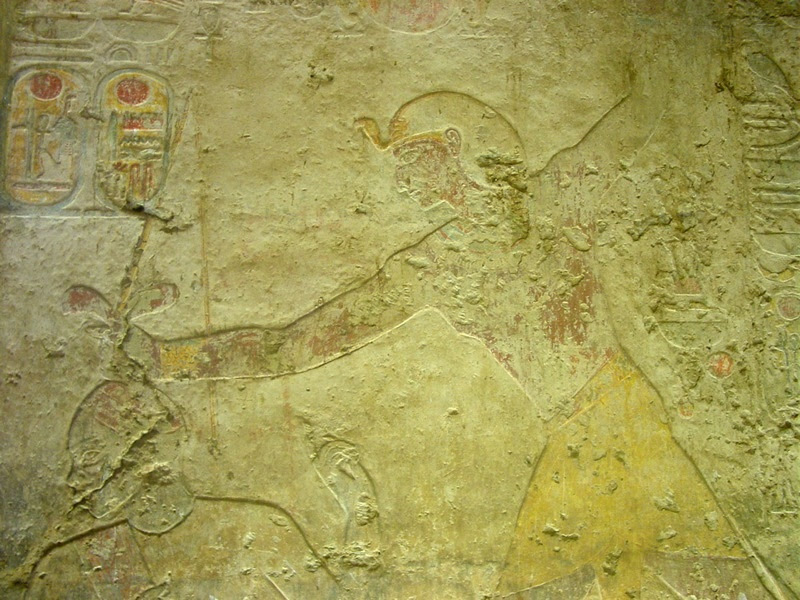 Ramesses/Mars smiting an enemy of Egypt. The above scene tells me this is a daytime battle with the light from the red Sun giving Ramesses/Mars a reddish yellow hue. This embodied in the whole scene i.e. the red coloured head and yellow headdress is red Mars enveloped by yellow/white clouds of volatiles. Ramesses/Mars is further coloured red (flesh) and yellow (loincloth) to emphasize this. The yellow 'skirt' also tells me the debris (earth's rings and the ecliptic debris) was further illuminated yellow as it fanned out towards earth. The yellow in the cartouche (meaning, the 'circuit of the Sun') reveals the sky also appeared basically yellow. The cobra on the forehead symbolizes the snake-like lava 'plumes' seen spiting 'fire and venom' as they lashed out into space from the Martian surface. As with most scenes, the red disk is again plentiful. 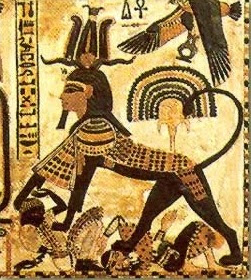 A Pharaoh as a lion trampling the enemy underfoot. 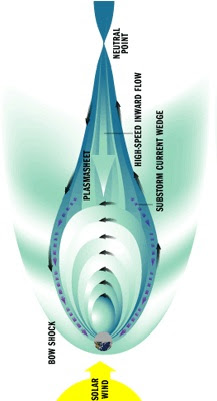 The key here is the distinctly odd headgear - the disk in the center is not the Sun, it is a planetary body, probably the recently captured Moon. The plumes are very close to what was seen as the solar wind slammed into the Moon as it fell under the electromagnetic and gravitational spell of the earth. Dust and debris granting visibility to the magnetotail of the body. Something similar to earth's magnetotail on the right (sun at the bottom).
The ram horns symbolize, in this case, the 'roles' of dust littering the ecliptic.
So the true meaning of the image is as follows; it represents the Moon taking on the attributes of a fearless lion as it vacuums up the countless tons of dust and debris encircling the earth.
I would further suggest the fan on the lions back represents enormous plumes of dusk and debris that were thrown up into space as the Moon was impacted by massive boulders. If this isn't the case then why have a fan sticking out of the lions rear in this way??

Below is a similar 'trampling scene' placed beneath a pharaohs throne. I don't know about you but I've yet to come across a blue lion. The moon appeared a variety of colours as too did the planets Mars, Mercury and queen Venus hence a blue lion - blue and gold to be more specific. I'm guessing this is a daytime scene i.e. sunside. 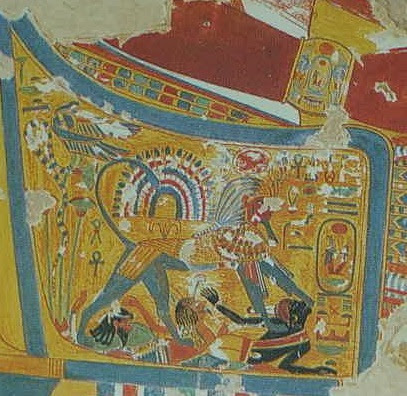 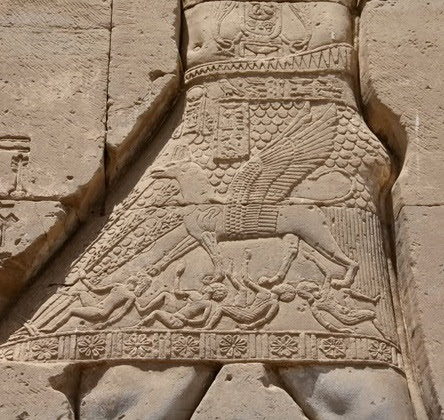 In the theme of sky battles, above we have a griffin sphinx trampling enemies on the pharaoh's skirt. The populace fully understood the meaning of these images - astral god kings seemingly crashing headlong into enemy celestial bodies.
Ramesses and the Battle of Kadesh

A drawing of the reliefs at the Temple of Luxor depicting the Battle of Kadesh. The bottom register shows Ramesses/Mars II (shown larger = planetary body) single-handedly charging the enemy. A practice any modern day commander would cringe at. Despite our history books containing very detailed accounts of this, 'battle of battles' the location of Kadesh has yet to found! A Prediction on which my theory stands. The Battle of Kadesh as with all Pharaonic battles will never be archeologically verified because they were all wars fought in the heavens. (Ramesses = "Re (the red sun) has fashioned him" i.e. the red Mars). 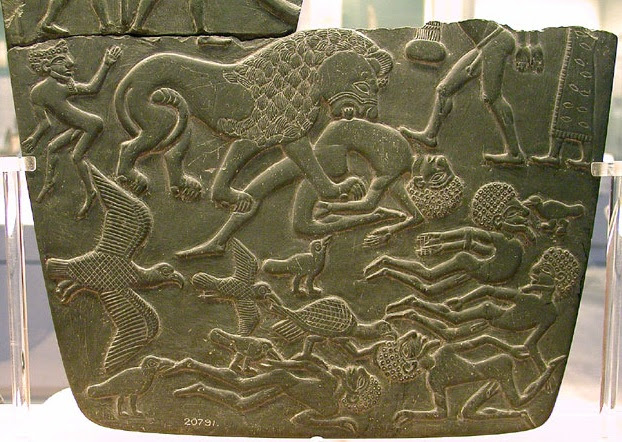 Lower half of the Battlefield Palette. Undoubtedly a wars in the heavens