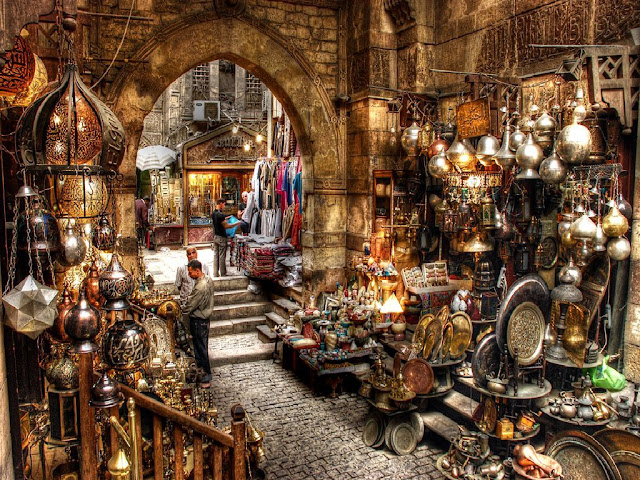 The souk dates back to 1382, when Emir Djaharks el-Khalili built a large caravanserai's (خان khan in Arabic) in Cairo under the Burji Mamluk Sultan Barquq; the eponymous khan is still extant. By the time of Barquq, the first Circassian Mamluk Sultan (1382–1399) much reconstruction needed to be done within the walls of the city in order to repair the damage incurred as a result of the Black Death. When Barquq started his madrassa in Bayn el-Qasrayn, markets were rebuilt, and Khan el-Khalili was established. It was also known Turkish bazaar during the Ottoman Empire.

Bustling doesn't begin to describe this souk, located in a dense network of twisting alleys. Every corner is jam-packed with stores and stalls that sell everything from Nefertiti busts to spices. This souk has been a center for craftsmen and trade since it was built in 1382 by Amir Jarkas al Khalili. The former Fatimid cemetery site was a place where caravans of traveling merchants could rest and engage in trade, and though in recent years it has focused mainly on the tourist trade, it retains much of its character and feel of a genuine Arab souk.
That said, it's hard to recommend actually shopping in the Khan if you're serious about getting something specific. Prices are higher than in other less-touristed parts of town, and quality is not always the best. On the other hand, this is the place to get a genuine Egyptian shopping experience. The crowds are dense, and the pressure to buy can be intense. You will be serially accosted by dealers in everything from shisha pipes to tea.
A couple of things to remember: First, keep your wallet somewhere safe; the only confirmed incident of pickpocketing that I know of happened here. Second, the black basalt carvings that they insist are real aren't. Third, have fun. You may find bargains or get ripped off, but as long as you have a sense of humor, you're in for a great time.
Allow for several hours of wandering the narrow alleys and exploring the different sections. Don't be afraid to wander beyond the main tourist areas into the spice souk or the narrower, darker areas toward the back -- in fact, I positively recommend it. Except for the odd pickpocket, the whole area is very safe.
Book your tour to old Cairo