The discovery of a new Monarch burial in Dayr al-Barshā
During its 2012 spring campaign, the archaeological mission of Leuven University in Dayr al-Barshā, directed by Harco Willems, has discovered an important burial dating back to the beginning of the Middle Kingdom (approx. 2040 B.C.). Although the burial has been robbed at least twice, and has suffered extensive damage, a large amount of objects were still found in their original position, providing unique information on the scenario of the funerary ritual. The tomb must have belonged to a monarch (i.e. a provincial governor) or to a person belonging to the close family of a monarch. It is for the first time in over a century that a relatively well preserved burial of this kind has been found.
The discovery was made in the tomb of the monarch Ahanakht I, who was the first Middle Kingdom governor of the Hare Nome (Nome = province). This tomb is well known, as it has been investigated already in 1891-1892, and was thoroughly excavated by the American archaeologist George Andrew Reisner in 1915. Reisner's work was crowned by the discovery of a nearly intact monarch burial in a neighbouring tomb. The beautiful remains from this latter tomb are world famous.
However, Reisner did not finish the excavation of the southwestern burial shaft in Aha-nakht's tomb. His diary makes clear that the American archaeologist was under the impress-sion that this shaft had been robbed only a short while before he arrived on the scene. For this reason, he stopped the excavation. This has proved to be a rare chance, as Reisner has thoroughly emptied all other tombs in the area. Therefore, the Leuven mission had in the previous ten years only excavated and documented tombs that had already been thoroughly emptied before, and there is no chance that other tombs of this kind may still be discovered elsewhere.
The excavation made clear that Reisner's assessment about tomb robbing was correct. Almost down to the bottom of the 6 m deep burial shaft, the archaeologists found disturbed material (although including some important reliefs from the decoration of the tomb), which included cigarette stumps and newspaper fragments dating back to the early 20th century. There were also numerous remains of tomb equipment, but it was not clear whether it came from this tomb, and all of it was much damaged. Moreover the burial chamber was filled to the roof with rocks, something that can only be explained by assuming that robbers threw these stones deliberately into the chamber. In the process, much of the wooden tomb equipment was crushed. Yet, many funerary gifts had not been noticed by the tomb robbers.
It seems that the tomb was robbed twice. The first robbing may already have taken place in antiquity. At that time, the robbers seem to have been interested mostly on precious mate-rials. Numerous pieces of gold leaf show that the coffins, and probably other objects, had been covered by this material. After this first looting event, the tomb seems to have been 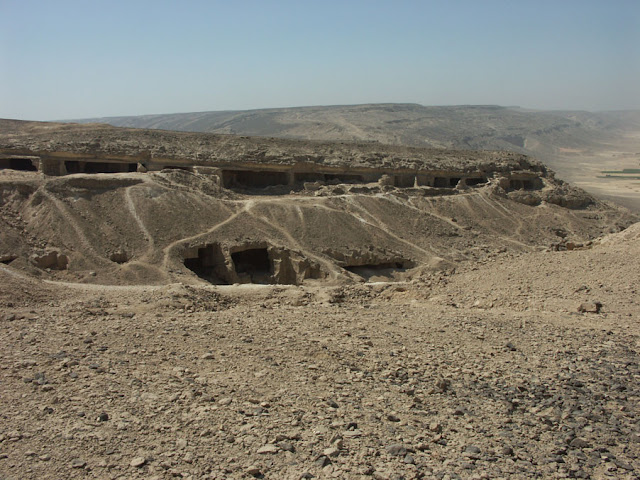