Modern living getting you down? Don't worry, the ancient Egyptians suffered just as much air pollution as we do today

Posted by Egyptraveluxe on August 24, 2011
http://www.egyptraveluxe.com/cairo_excursions.php
Environmentalists may have something to say about it, but an expert looking into the health of ancient Egyptians has found that they may have suffered the same levels of damaging air pollution than we do now.
Obviously, the ancient air pollution was not generated by the same causes, but the effects on the body were just as pronounced, and in a lot of cases just as deadly.
Roger Montgomerie, a doctoral student at the KNH Centre for Biomedical Egyptology at the University of Manchester, England, has uncovered evidence of 'particulates' in the lungs of 15 separate mummies.
Particulates are tiny microscopic particles that have been linked to a variety of modern-day illnesses, including heart disease and cancer. 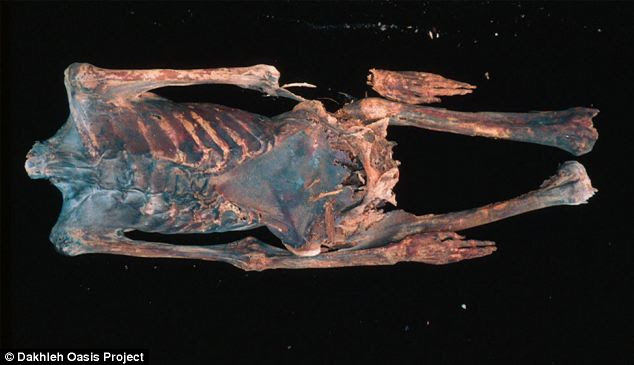 Key to the past: The mummified remains of a worker discovered in Dakhleh Oasis, a remote outpost in southwest Egypt, shows that there are close to modern-day levels of 'particulates' in the lungs
It has been commonly belived that our heavily industrial, fossil-fuel-burning way of life has led to an increase in the airborne particulates.
But Mr Montgomerie's research has found high levels of particulates in the mummified tissue of ancient Egyptians - and surprisingly across all strata of society.
His work, on 15 separate mummified lung samples, is the first attempt to study particulates in multiple Egyptian remains. And he has revealed that the levels of particulates in ancient Egyptian lungs are not much below modern-day levels.
Mr Montgomerie told LiveScience: 'I would say it would be less than modern day, but not much less. It's quite bizarre, if you think about it, considering we have the mass burning of fossil fuels and an awful lot of pollution that has been going on since the industrial revolution.' Traffic jam: A study of the preserved remains has found levels of damaging particulates over all walks of life in ancient Egypt, from lowly workers to high priests 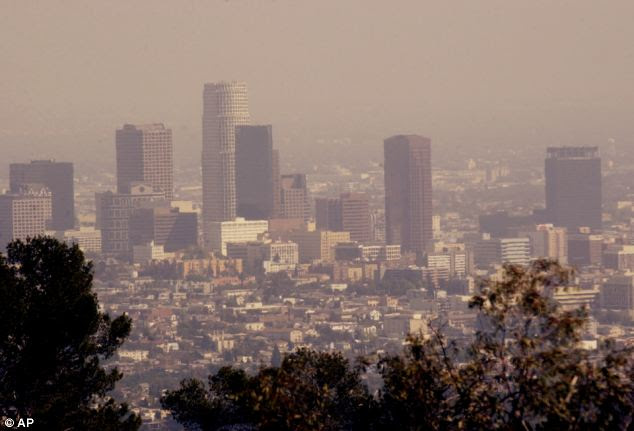 Unhealthy: Smog-filled air over Downtown Los Angeles is an example of how our fossil-fuel-burning civilisation is not doing our lungs any favours
Mr ontgomerie said his 15 subjects came from a broad cross section of Egyptian life, not just the pyramid-building working class.
Some were ordinary workers who lived in a remote outpost called the Dakhleh Oasis, while others were of the upper class - nobles and priests or priestesses.
He said: 'Everyone seems to have a degree of it, it doesn't seem to be confined to one social group.'
That suggests there were a range of causes of air pollution, and that the Egyptians were not the healthiest of races.


'I would say it would be less than modern day, but not much less... Everyone seems to have a degree of it, it doesn't seem to be confined to one social group'

Mr Montgomerie: 'It would definitely increase your chances of getting a lung infection and also probably increase your chances of something like pneumonia as well.'
While ancient Egypt was a preindustrial society, there is abundant evidence that they engaged in cooking, metal working and mining.
Sandstorms wouldn't have been easy on the lungs either, stirring any particulates into the air.
Mr Montgomerie is burning different sources of fuel used by the Egyptians and capturing the particulates they create. He is also gathering sand from archaeological sites and comparing them to sandy particulates found in the lungs.
Inhaled desert sand from a storm, for example, should be 'nice and rounded', while mined sand would be 'sharp and angular'.
He told LiveScience that it will be at least three months until he has results back from his experiment.
This research was presented at the 12th annual Current Research in Egyptology conference, held in March at Durham University in the United Kingdom.