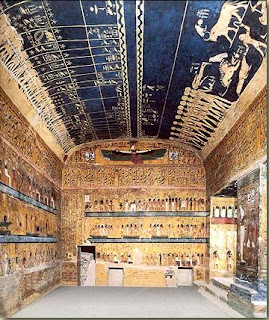 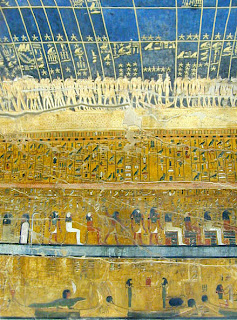 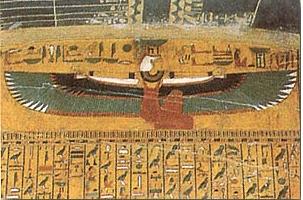 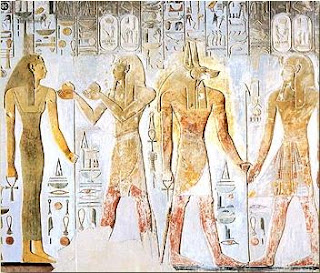 Tomb KV17, located in Egypt's Valley of the Kings and also known by the names "Belzoni's tomb", "the Tomb of Apis", and "the Tomb of Psammis, son of Nechois", is the tomb of Pharaoh Seti I of the Nineteenth Dynasty. It is one of the best decorated tombs in the valley, but now is almost always closed to the public due to damage. It was first discovered by Giovanni Battista Belzoni on 16 October 1817. When he first entered the tomb he found the wall paintings in excellent condition with the paint on the walls still looking fresh and some of the artists paints and brushes still on the floor.
The longest tomb in the valley, at 136 metres, it contains very well preserved reliefs in all of its eleven chambers and side rooms. One of the back chambers is decorated with the Ritual of the Opening of the Mouth, which stated that the mummy's eating and drinking organs were properly functioning. Believing in the need for these functions in the afterlife, this was a very important ritual. A very long and still incompletely explored tunnel leads away into the mountainside from beneath the location where the sarcophagus stood in the burial chamber
The sarcophagus removed on behalf of the british consul Henry Salt is since 1824 in the Sir John Soane's Museum in London. KV17 was damaged when Jean-François Champollion, translator of the Rosetta Stone, removed a wall pannel of 2.26 x 1.05 m in a corridor with mirror-image scenes during his 1828-29 expedition. Other elements were removed by his companion Rossellini or the german expedition of 1845. The scenes are now in the collections of the Louvre, the museums of Florence and Berlin.
The tomb became known as the "Apis tomb" because when Giovanni Belzoni found the tomb a mummified bull was found in a side room off the burial hall.
A number of walls in the tomb have collapsed or cracked due to excavations in the late 50s and early 60s causing significant changes in the moisture levels in the surrounding rocks. 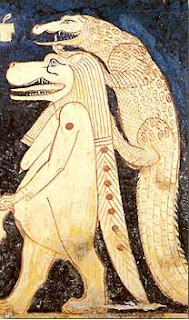 The tomb of Sety I consists of a total of seven corridors and ten chambers, decorated with painted, raised relief (with the exception of Fa). Three sloping corridors (B, C, D), lead to a well chamber (E) and pillared chamber (F) with side chamber (Fa). A side descent and two sloping corridors (G, H) lead to a chamber (I) beyond which lies burial chamber J. This has five side chambers (Ja-Je), and a long passage (K) at the rear.

Noteworthy features: KV 17 is one of the most completely decorated tombs in the Valley of the Kings, with painted raised relief decoration of the highest quality. There is an unusually long descending passage (K) in the floor of the burial chamber J. Recesses were cut in the benches of Jb.
Axis in degrees: 218.68
Axis orientation: Southwest 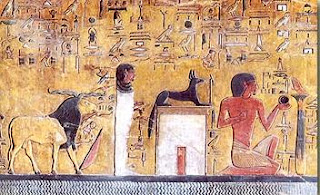 
Dating:
This site was used during the following period(s):
New Kingdom, Dynasty 19, Sety I

Conservation history: In 1825, Burton finished building protective dykes around the tomb entryway to prevent flood waters from entering the tomb. Carter did a large amount of consolidation work in 1902-1903, particularly in the burial chamber J, making extensive use of brick masonry to support gate J, the lower portions of the walls and gate Jd, as well as the upper part of corridor K.

In 2001, work was begun to change the modern walls around the tomb's entrance to reduce potential flood damage.
Site condition: In the year following the opening of the tomb, flood waters from rains entered the lower chambers. Belzoni had filled the shaft in well chamber E with debris, but had failed to complete the construction of protective dykes outside the tomb entrance. As a result of the expansion and contraction of the stone and loosening of the plaster, large pieces of the walls and ceiling fell. James Burton completed Belzoni's dykes and cleared well E of debris; the tomb has not flooded since. As a part of his conservation work, Carter repaired damage to the walls, but cracks have reappeared and the condition of the walls continues to worsen.

The tomb has also suffered at the hands of vandals who have hacked away at its walls searching for hidden chambers or trying to remove painted relief. 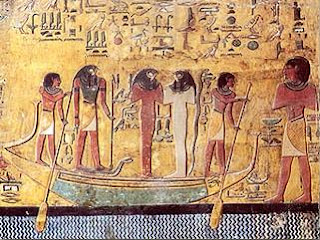 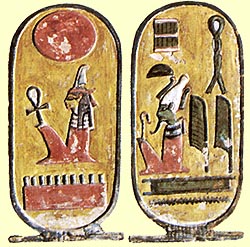