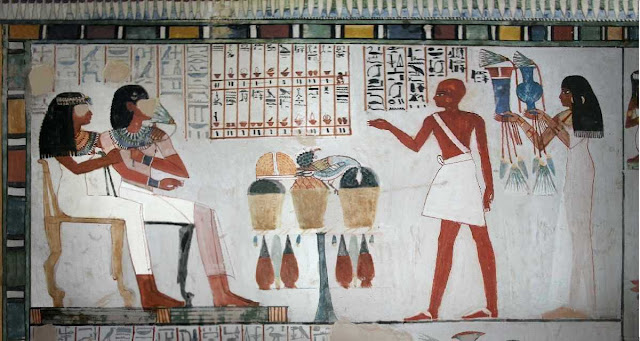 Menna and Henuttawi are seated on two different colour chairs, his being black, both resting on a reed mat. Both of their faces have been removed. Above the couple, the text states: "May everything which comes forth in presence of all the gods which are in Neterkhert (the other world) be for the Ka of the scribe of the estate of the Lord of the Two Lands, [Menn]a." This is follow by: "His sister, lady of the house, chantress [of Amon], Henuttawi.". Part of the name 'Menna' and the 'Amon' after chantress have been destroyed. Menna is clothed as in most of the other scenes and decorated with a broad necklace and arm bracelets. In one hand he holds the stem of an umbel of lotus from which he breathes the perfume. His wife is in her usual attire, with a broad necklace but with no arm decoration. She affectionately wraps her left arm around his back, whilst holding his upper right arm with her right hand.
In front of them is a single pillared table laden with baskets of fruit, a goose and a cluster of grapes. Under the top of the table are four closed ovoid jars, two on either side, each with a lotus bloom wrapped around it and between each pair is a plant. Above the provisions provided for the afterlife is a conventional rectangular menu area, providing the numbers, measures, and quantities of many other things for them, among which are wine, geese, beer, fruit, etc.
Facing the couple is one of their sons, Kha, and behind him is possibly his sister, although there is no identifying text. He has the white kilt with the shoulder strap and white sandals, his head is also shaven. The text above Kha states: "His son, the wab-priest, Kha. He says: 'Making an offering purified twice, to his (my) father and his mother, of bread, liquor, oxen, geese, every good and pure thing, cool water, and wine.' ".
The young woman is dressed in a long flowing semi-transparent dress and a long black wig with small locks at the end. She has a broad necklace, arm bands and bracelets. In her hands she holds lotus flowers and two large vases dominated by blooms. Close to the first red and blue vase is written the hieroglyphs indicating the content: "milk" (jrtt). The other vase is totally blue. Such a deep blue colour indicates that the artist probably had either a faience or glass vessel in mind: this scene is one of the first showing man-made glass in Egypt.