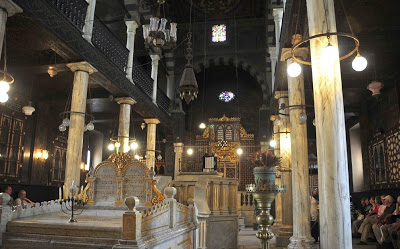 The capital city of Egypt, Cairo became the center of Jewish life in Egypt following the Crusades of 1168. Cairo's Jewish community lived primarily in the new city, in the Ḥārat al-Yahūd (Jewish quarter). Throughout the medieval period, Jews maintained their cultural traditions and relative political autonomy, and ultimately advanced economically into positions as craftsmen, traders, moneychangers, and physicians. However, the Mamaluk era from 1250 to 1517 marked a shift towards increasingly discriminatory and harsh laws against Jews and other religious minorities. This anti-Jewish discrimination continued through the Ottoman era and into the late eighteenth century, with life in the Jewish community becoming increasingly regulated. In the nineteenth century, Muḥammad ʿAlī and a series of other leaders governed Cairo as viceroys for the Ottoman sultan, improving security and economic development in Cairo. Despite a number of antisemitic publications and accusations published between 1844 and 1901, the Jewish community felt safer under the rule of Muḥammad ʿAlī than during other periods of history. Additionally, Cairo's Jewish population began to boom from about 3,000 in the early 1800s to over 29,000 in 1917. Following Egypt's independence from Britain in 1922, the Jewish population in Cairo continued to boom, reaching 41,860 in 1947. However, antisemitism became increasingly common through the 1930s and 1940s as Nazi propaganda spread, the Young Egypt and Muslim Brotherhood movements gained membership, and the newly established State of Israel defeated the Egyptian army. As such, Jews were often physically harmed or had their homes or businesses attacked, and by 1951 a large percentage of Cairo's Jewish population had left Egypt. Following the Sinai War of 1956 and the 1967 war, the majority of Cairo's remaining Jewish community had fled the country, often for Israel, France, or Italy. Today, only a few dozen, primarily elderly, Jews remain in Cairo Numerous restorations and renovations were made over the centuries, and the present building dates from 1892. It is a faithful reconstruction of the original, which had collapsed. During the reconstruction, a medieval Geniza (a hiding place for sacred books and worn-out Torah scrolls) was discovered, revealing thousands of original documents from the Middle Ages. 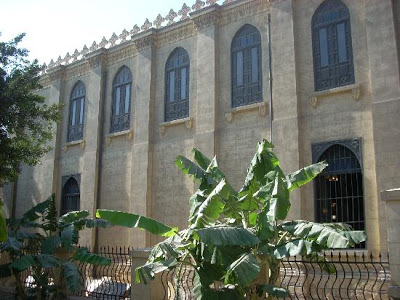 The Ben Ezra Synagogue is situated in the Coptic section of Old Cairo. According to local tradition, there are two possible reasons for locating the building on this particular site. Either this was where the baby Moses was found in the bull rushes, hidden from danger, or this was where the adult Moses prayed to God that the Jews might be taken out of slavery in Egypt. The other legend says that it was here that the prophet Jeremiah regrouped the Jewish people after they were expelled from Jerusalem. In 1896, 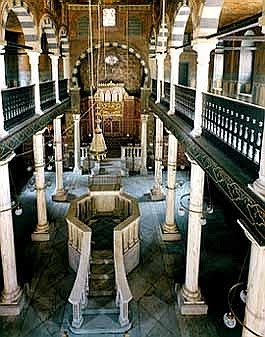 The Supreme Council of Egypt Antiquities has indicated that the building holds a special spiritual value to Copts since at one time it had been turned into a Coptic church. Furthermore it is of interest to the Muslims since it was built in Islamic style during the Era of the Caliphs.   Ben Ezra synagogue is under a government preservation order and the government has decided to use its own funds to renovate the building.
The Ben Ezra Synagogue was originally a Christian church, which the Coptic Christians of Cairo had to sell to the Jews in 882 AD in order to pay the annual taxes imposed by the Muslim rulers of the time. The church was purchased by Abraham Ben Ezra, who came from Jerusalem during the reign of Ahmed Ibn Tulun, for 20,000 dinars. Little is known about the original building. In about 1012, Fatimid caliph Al-Hakim bi-Amr Allah ordered the destruction of all Jewish and Christian places of worship. The original Ben Ezra Synagogue was torn down, "its bricks and timber sold for scrap The next caliph Ali az-Zahir allowed reconstruction of Christian and Jewish institutions, and the synagogue was rebuilt in the 1025-1040 period. Study of a carved wood Torah ark door reliably attributed to the synagogue sheds light on the history of the synagogue's renovations. The door is jointly owned by the Walters Art Museum in Baltimore, and the Yeshiva University Museum in New York. Radiocarbon dating verifies that the wood goes back to the 11th century C.E
The synagogue was a place of pilgrimage for North African Jews and the site of major festival celebrations. The famous medieval rabbi Moses Maimonides worshipped at Ben Ezra synagogue when he lived in Cairo.
Numerous restorations and renovations were made over the centuries, and the present building dates from 1892. It is a faithful reconstruction of the original, which had collapsed. During the reconstruction, a medieval Geniza (a hiding place for sacred books and worn-out Torah scrolls) was discovered, revealing thousands of original documents from the Middle Ages

The Synagogue of Ben Ezra has a basilica-style plan and two floors, the lower one for men and the upper one for women.
The main floor is divided into three parts by steel bars, and in the center is an octagonal marble bima (platform for Torah reading). The synagogue is decorated with geometric and floral patterns in the Turkish style.
Today Ben Ezra Synagogue is a historical monument and the most-visited Jewish site in Cairo. Be prepared to pass through security in order to enter the synagogue.