The wooden piece, probably depicting sixth-dynasty queen Ankhnespepy II, has been unearthed near her pyramid .

the head is of almost-human proportions, and is around 30cm high. The ears are decorated with wooden earrings.
It  was found in a disturbed layer to the east of the queen's pyramid near the area where the pyramidion was uncovered early this week.

Over the last two weeks , the mission has uncovered the upper part of a granite obelisk that may belong to the queen's funerary temple, as well as the pyramidion of what may be an undiscovered satellite pyramid.

the head is not in good condition and will be subjected to restoration and documentation.
"It is a promising area that could reveal more of its secrets soon," Waziri told Ahram Online, adding that the mission is to continue its excavations in an attempt to discover the satellite pyramid and the rest of her funerary complex and collection. 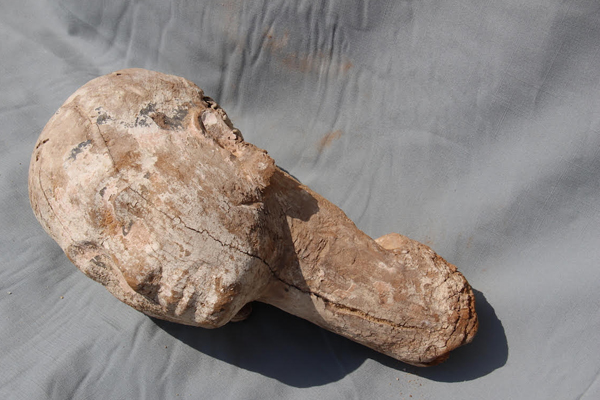