Tour to ElMoalla and Elkab Tombs

Posted by Egyptraveluxe on December 29, 2013 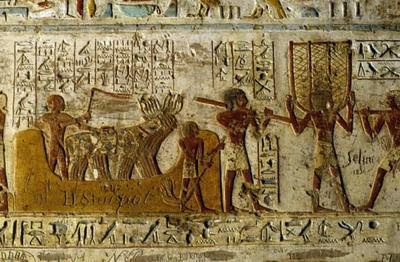 The village of Elkab is located 80 km south of Luxor and 15 km north of Edfū on the east bank of the Nile. There, at the mouth of Wadi Hilal, was the ancient city of "Nekheb" one of the oldest settlements of Upper Egypt. Its massive mud-brick walls, dating to the Late Period (747 - 332 BC) are still largely preserved. The main temple was dedicated to the Vulture Goddess Nekhbet who was the patron of Upper Egypt. The temple is heavily destroyed and not accessible but you can visit 3 smaller temples as well as rock-cut tombs of the provincial governors of Elkab. Also well worth seeing are numerous petroglyphs and inscriptions which you can find on your way between the temples on the rock faces. Egyptraveluxe Egyptologist Tour guide will pick you up from your hotel in early morning to avoid the heat . Start walking with your Egyptologist guide in Elkab  visit 4 rock-tombs date back to the New Kingdom (18th to 20th dynasty). The colourful reliefs show scenes of the daily life as well as religious depictions in the context of the tomb-owner's burial . Let our Egyptologist guide take you back in time with this leisurely visit to El kab listen and learn while our historian describes for you in detail the life of the war lords , the meaning of the Hieroglyphics, the reason the tombs are located here, the role played by the high priest, and much much more. Next into the impressive Temples of Elkab , there are 3 smaller temples.  start  visit with the temple which is furthest from the main road: Temple of Amenhotep III It is dedicated to the cow-headed goddess Hathor and the vulture goddess Nekhbet and dates back to the 18th Dynasty , Temple of Setau The square temple, also called "El-Hammām" and "Chapel of Thot" was built by Setau, Viceroy of Kush, during the reign of Ramesses II ,The Ptolemaic Temple "Hemi-speos, "Hemi-speos" is the name for a temple which is partially rock cut and partially exposed. The Hemi-speos in Elkab was already built during the reign of Ramesses II but early destroyed and only then new built during the reign of Ptolemaios VIII and IX. It is dedicated to the Lion Goddess Seshmetet. A 15 m long stairway leads to the terrace, the courtyard, and the rock-cut sanctuary. .
On your way back to Luxor stop at ElMoalla to visit the tomb of Ankhtifi who was one time governor of the area between Edfu and Armant. He was a very important man in his time and noted for feeding the people in neighbouring areas during a time of famine. The tomb is of slightly irregular shape and cut directly into the rock, shaped to fit in with the harder veins in the rock strata. On entry there is a rectangular chamber that originally had 30 pillars in three rows of 10, some round and others hexagonal in form. Most pillars are decorated with fine plasterwork and those pillars near the doors carry the best examples of coloured hieroglyphs. An amusing scene on the wall immediately to the right of the entrance door shows a huge fish being caught by spear, and there is a small picture of the deceased and his beautiful wife in very good condition, about 50 cm sq. Other interesting scenes of daily life include lines of animals carrying food to relieve a local famine and a row of spotted cattle to indicate Ankhtifi’s wealth. The burial chamber lies at a lower level at the rear of the main hall. , Also enjoy privileged, personalized attention from your expert Egyptologist guide on this special private tour. 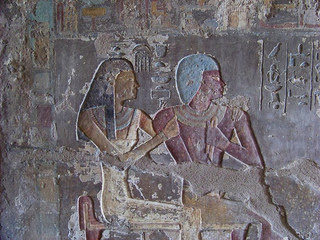 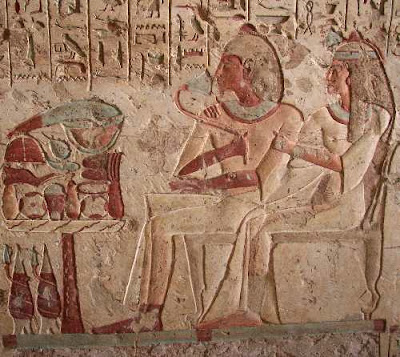 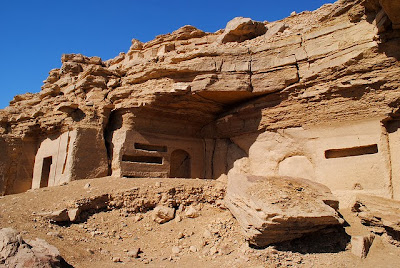