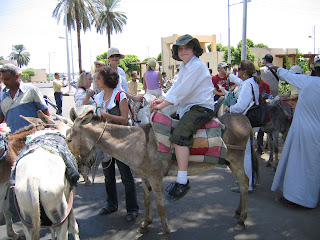 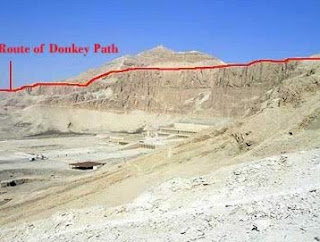 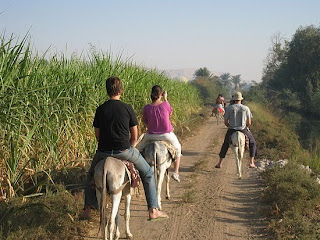 had taken the donkey ride over the ridge on the West Bank at Luxor (ancient Thebes), Egypt. It is an amazing experience following in the steps of the workman that built the tombs on their daily commute from their homes at Deir El Medina on one side of the mountain to the Valley of the Kings on the other side.


started really early as it is much cooler then and easier on both man and beast. I had asked for and been promised a nice quiet animal. It had to be very strong as well although I am light weight but tall . I went with some friends and we started at ferry boat dock on the West Bank of Luxor. The donkey man, abdelmawgud, managed to get us all on board which was an accomplishment in itself. My saddle seemed to be really insecure but off we went. This is an amazing way to travel with the soft clip clop of the donkey's little hooves plodding along. Exchanging greetings with locals on their way to work, we got to the cross roads where the big tours busses have right of way. Well actually they didn’t because our donkeys were determined to keep on going and we couldn’t stop them. The policeman was in fits of laughter as he stopped all the big coaches so this group of middle aged ladies on uncontrollable donkeys went across. Our guide was laughing too hard to be of use. Actually he told me after wards he always lets that happen because the guests enjoy it.
We went passed the Colossus of Memnon and up to the workman’s village at Deir El Medina. One can appreciate the site of Amenhotep III's mortuary temple so much better from this vantage point and we were going slow enough to take note of all the current excavation work. It was very interesting.

At Deir El Medina we started ascending the mountain. The donkeys needed little guiding as they had done this route many, many times, which was just as well because hanging on required all my concentration. The path ascended quite quickly and within a few minutes one can see the village laid out beneath. It is truly an amazing way to view this site, looking almost like a plan drawing.

Just to the right looking back one could see the Valley of Queens and even in the distance the mortuary temple of Ramesses III at Medinet Habu. Only 10 minutes and already we had fantastic views. However, the ascent started getting steeper and my saddle more insecure. Whoops I started to slip and gracefully, I like to think, descended to the ground. I told the guide that saddle was wrong and we got it sorted out and were off again.

There were a couple of places where we had to get off and lead the donkeys but we were able to ride most of the way. There were some people doing the same route by foot, which if one is young and active is a great alternative, so I was sticking to my donkey. Well at least I was trying to. It was interesting to think about treading in the footsteps of the tomb builders who traveled the same route so many thousands of years ago. One wondered if those steps cut in the rock were from ancient times. The views were spectacular, the landscape and in the distance a hazy glimpse of cultivation. But it was the sites that I couldn’t get over. We had already seen Medinet Habu, Deir El Medina and the Valley of Queens, and wasn’t that the Ramasseum in the distance. Down below us there was the temple of Hatshepsut and to the side the Valley of the Kings
Actually at the top one realizes the relationship between the Valley of the Kings and Deir El Bahri much more clearly. It is only a short distance between the two. It made it much easier to understand the relationship between Hatshepsut’s tomb and her temple. The Valley lay beneath our feet and we could see what looked like small ants scurrying around going into tombs, the entrances of which we could see clearly. On the other side we could look straight down on the top terrace of Hatshepsut's temple and the ramps of the lower levels.

At this point the donkeys left us as it is very steep. They descended by themselves in no time but we took ages as we walked down by the side of Hatshepsut's temple getting the most fantastic views. Stumbling across rock cut tombs and small burial pits, we found even more fossils and came back with bulging pockets.