The group of eight harvesters bend, sickle in and, in order to cut the sheaves of wheat, although the third from the left is busy having a drink of water, the upper part of his image is lost. Facing him stands a woman, indicated by her long skirt and pink upper garment, holding on her shoulder a woven basket. She probably brought to him the water container. In the middle is a young child, clothed in only a slim belt, although what he holds is unknown due to damage. Only the top of the wheat is cut in order to leave the stubble for grazing, which will be the last stage of the harvest.


Above the harvesters are six trees, shown in a smaller scale, giving an effect of perspective, possibly to show the far extent of the field. On the branches of the first two trees, on the left, in front of the larger scale tree, are again visible nests with eggs, whilst a bird can be seen taking flight between the two 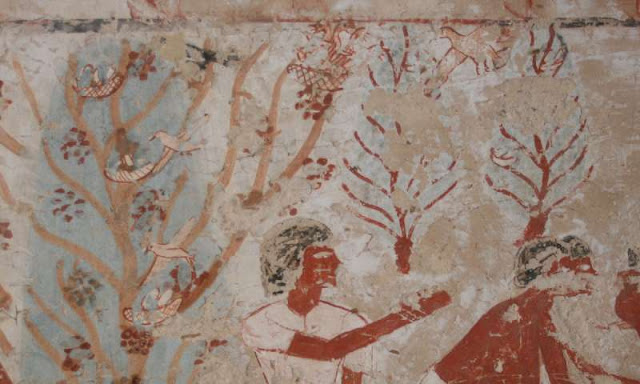 . At the foot of the third, from which hang some pods (possibly a carob tree or an acacia), a woman sits on a stool  She holds a child, secured to her chest by a large support consisting of strips of cloth which wrap around her upper torso. The child raises a hand to its mother's hair (or perhaps this is a wet nurse). A bowl full of fruit rests near her feet, but it is difficult to identify this fruit 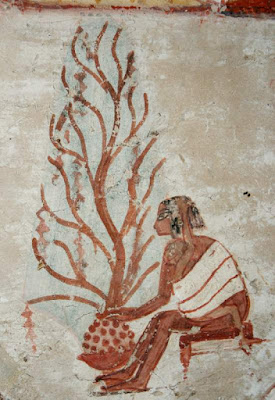