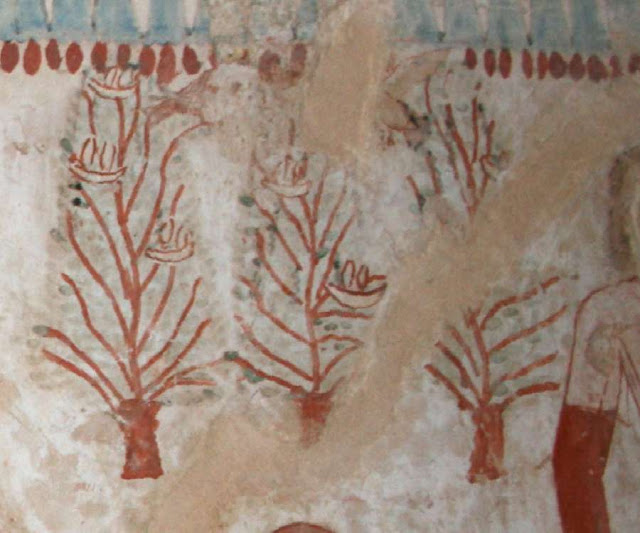 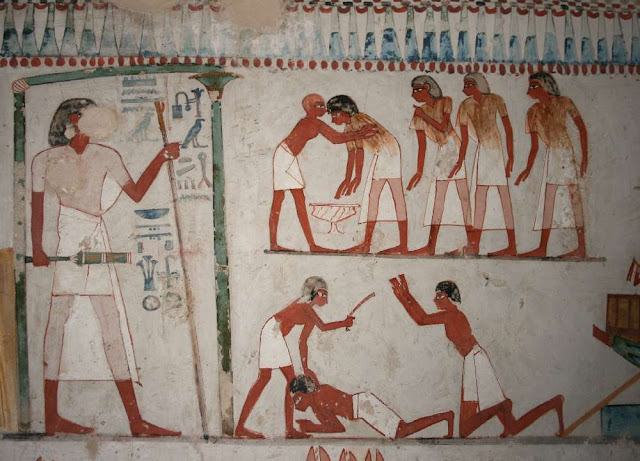 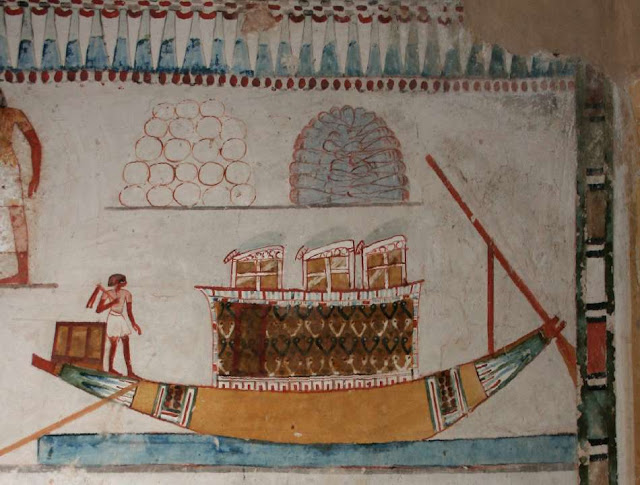 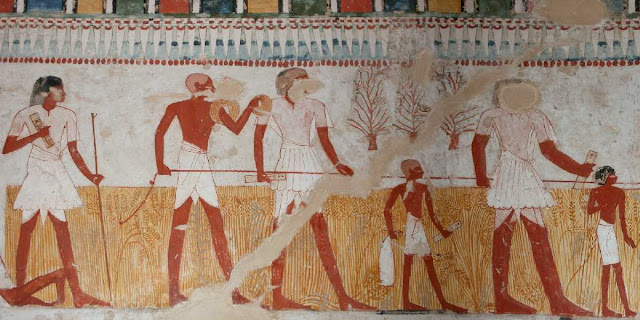 at first seem strangely out of sequence, because the crop is ripe and has not yet been harvested. The reason for it taking place at this time would be to ascertain the portion of the crop which would belong to the estate of Amon.

In total there are five scribes, which include the two scribes on the left (see image above, in the offering section, the front-most of the two is also to the left in the image above), next to the offerings. The others are positioned along the measuring rope, identified by their clothing. Towards the middle of the rope two scribes stand next to each other and it is difficult, at first glance, to see both of them. All of these scribes would belong to the records office and be responsible for the taxation of the land. It can be assumed that those nearest the offerings are of a higher rank as they are shown holding their staff of office. All the scribes wear a pleated kilt over a tripartite kilt, with a semi-transparent, short sleeved shirt and all hold their scribal materials in one hand. They all wear a black wig. With the exception of the left-most, all the faces of the scribes have suffered damage. None, however, seem to be taking notes.

Two assistants carry out the actual measurement, the one at the rear holds the end of the rope, keeping it taught, whilst the other, at the front, holds the remains of the coil. Both of these men have spare coils. [Note that the cord appears to pass behind the leading man.] They only wear the tripartite kilt (no shirt) and a pink head covering (this could actually represent that they have shaven heads). The three scribes alongside the rope are accompanied by two children, one of which (the rear-most) carries a bag and a spare palette.

Walking behind the lead measurer is a man of a slightly shorter stature. One side of his white loincloth descends down his leg. His imagery gives the impression of him being blind, because he holds a long cane in his left hand, whilst his other is placed on the head of the young naked boy who stands in front of him, as if to guide him.

At the far right, the possible owner of the land, followed by a woman who could be his wife, approaches the lead measurer. The man wears a loincloth of the same style as the "blind" man. In his hand he holds a sheaf of wheat, interpreted by Egyptologists as the "bride" symbol, still found today in the Egyptian countryside at the time of the harvest. In his other hand he holds a dish on which is placed a pointed cone of bread. The woman wears a long wig and is dressed in a white sheath dress with a single strap, revealing her breast. She carries a yellow basket on her head supported by her right hand. This is filled with produce. With the other hand, she holds a goblet, the content of which is unknown. Bringing up the rear of the scene is a donkey, whose image has been totally and deliberately erased. It is possible that this was erased during the Ramesside period because of the relationship between this animal and the god Seth, who during this time was thought of as the murderer of Osiris. This donkey was being driven by a boy holding a stick in his right hand, and a woven bag and a small gazelle grasped of his left arm. If this is the son of the couple, then the family appear to bring provisions to the scribes and measurers. Is this as a "reward" for measuring the field or a bribe to leave more for the family, i.e. to encourage officials to lower their taxes?


At the top of the scene are three trees, again they are there to produce depth to the image, or to mark the boundary of the field. The trunk and branches are brown, the green of the trees is now almost lost. In the branches are bird nests, each containing eggs and a bird is perched on a branch.

Menna and the final scenes


The register ends with a scene showing Menna having achieved his function. He stands inside a pavilion/shelter of the usual reed construction. The text inside identifies him as "Scribe of the estates of the Lord of the Two Lands of South and North". His name remains intact although once again his face is damaged. He wears a wig which extends to the base of his neck, and he is clothed in a short plain kilt over which fits a short-sleeved garment of a fine transparent material, descending to his mid-calf. With his left hand he holds his long staff of office, and with the right the green kherep-sceptre.

At the far right, is displayed a moored boat resting on a blue oblong, representing the river or an inland waterway. This could either represent the means of transportation and the official vessel of Menna, the method to transport the taxed volume of the harvest or the boat which has just brought the four men of the upper sub-division. The two ends of the craft are decorated with blue lotus with another design nearer the main body. The rear is equipped with a steering-paddle whilst the mooring rope is seen to the left. Its cabin is composed of a multicoloured tent cloth supported on a frame, on the roof of which are placed three yellow and white chests. At the mooring end, the stern, stands a man holding a whip on his shoulder. He is dressed as so many others on this wall, wearing a transparent shirt and a short kilt. Above the craft is a horizontal line representing the bank, on which are piled round white objects and in another pile, oblong blue-green objects.

Between Menna and this craft the sub-register is again sub-divided. In the uppermost, a man wearing a skullcap and dressed only in a white loincloth, receives four men, all dressed to indicated that they are of a higher rank. (Perhaps they have just arrived in the boat.) On their heads they wear a black wig and clothed in a white kilt over which is a long transparent short-sleeved garment. This has been roughly ochre coloured above the waist. Could this be what the servant in front of them has applied from the bowl, located between him and the four? Could it be a fatty unguent with which he covers the shoulders of the officials, in order to protect them from the burning of the sun? This servant places his hands on the shoulders of the first, who leans towards him, as do the other three.

Below this, in the other sub-division, a beating is being carried out by a servant of Menna, on a man who is lying face down in front of him, possibly accused of fraud or some other deed. A third man, who kneels behind, has his arms raised, as if asking for mercy. It would have helped if the architect had provided some explanatory text.